"Get ready!" to play this classic in 3D.

Sega's Space Harrier burst on to the scene in 1985, and went on to be named "the best arcade shoot-'em-up of the year" by Computer Gaming World. Now, it's available for the Nintendo 3DS, retrofitted with stereoscopic 3D visuals. Space Harrier is an interesting shoot-‘em-up, as the camera is positioned behind the player and the game moves forwards towards the horizon rather than vertically. This unique take on the genre makes it not only refreshing, and but also perfect for the stereoscopic 3D visuals offered on 3DS. I remember playing this game in the past, and constantly dying because I had difficulty gauging the distance of incoming objects. Because the original game could only convey depth by scaling the size of the sprites, the addition of true 3D visuals actually improves Space Harrier by making it far less frustrating to play.

Like all classic games, Space Harrier defies its age and remains fun to play at nearly 30 years old. Thanks to its third-person view, the gameplay is still a breath of fresh air. The breakneck speed and large amount of objects on screen make the game both fun and challenging to play. Enemy designs and movements vary from the simple drone-like baddies that fly towards you and shoot straight all the way to giant two-headed dragons that zig-zag around, spewing dozens of giant fireballs across the screen. The colorful, and triply visuals, memorable theme song, and vintage voice samples further add to the enjoyment. 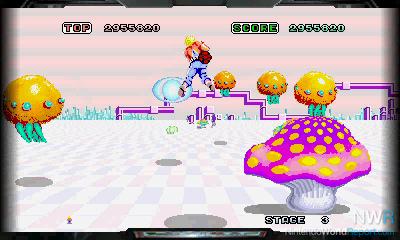 Sega has gone to great lengths to properly emulate the original arcade version of the game. The options to adjust the borders of the game to reveal more of the arcade cabinet's frame, as well as the options to have the gameplay tilt side to side to mimic the motion of the original cockpit-style cabinet are both welcome additions. Being that Space Harrier was originally an arcade game, it does its best to try and murder you, and there are some "cheap deaths" to be had. Thankfully, removing the need to feed the game quarters also removes that feeling of the game actively hating you. I found the default challenge level to be pretty good, but it can be adjusted if players happen to find it too easy or difficult. It's a shame there are no online leader boards.

The frantic gameplay, imaginative presentation, and new stereoscopic visuals all combine to make this 3D recreation of the arcade classic a blast to play. Fans of the genre are sure to find 3D Space Harrier to be just as or possibly even more enjoyable than the original.

Mike, I welcome you to my fantasy zone.
GET READY