The Legend of Zelda: A Link Between Worlds

Does the Link to the Past successor live up to the its legacy?

The past few Zelda games, while still very good, have been designed around gimmicks. Phantom Hourglass and Spirit Tracks featured touch controls and Skyward Sword hung its hat on motion controls. The first original 3DS Zelda game, The Legend of Zelda: A Link Between Worlds, bucks that trend, eschewing gimmicks for a rock-solid, streamlined 2D Zelda game that delightfully straddles the line between a faithful recreation of a classic formula and a fresh experience that feels wonderfully new. 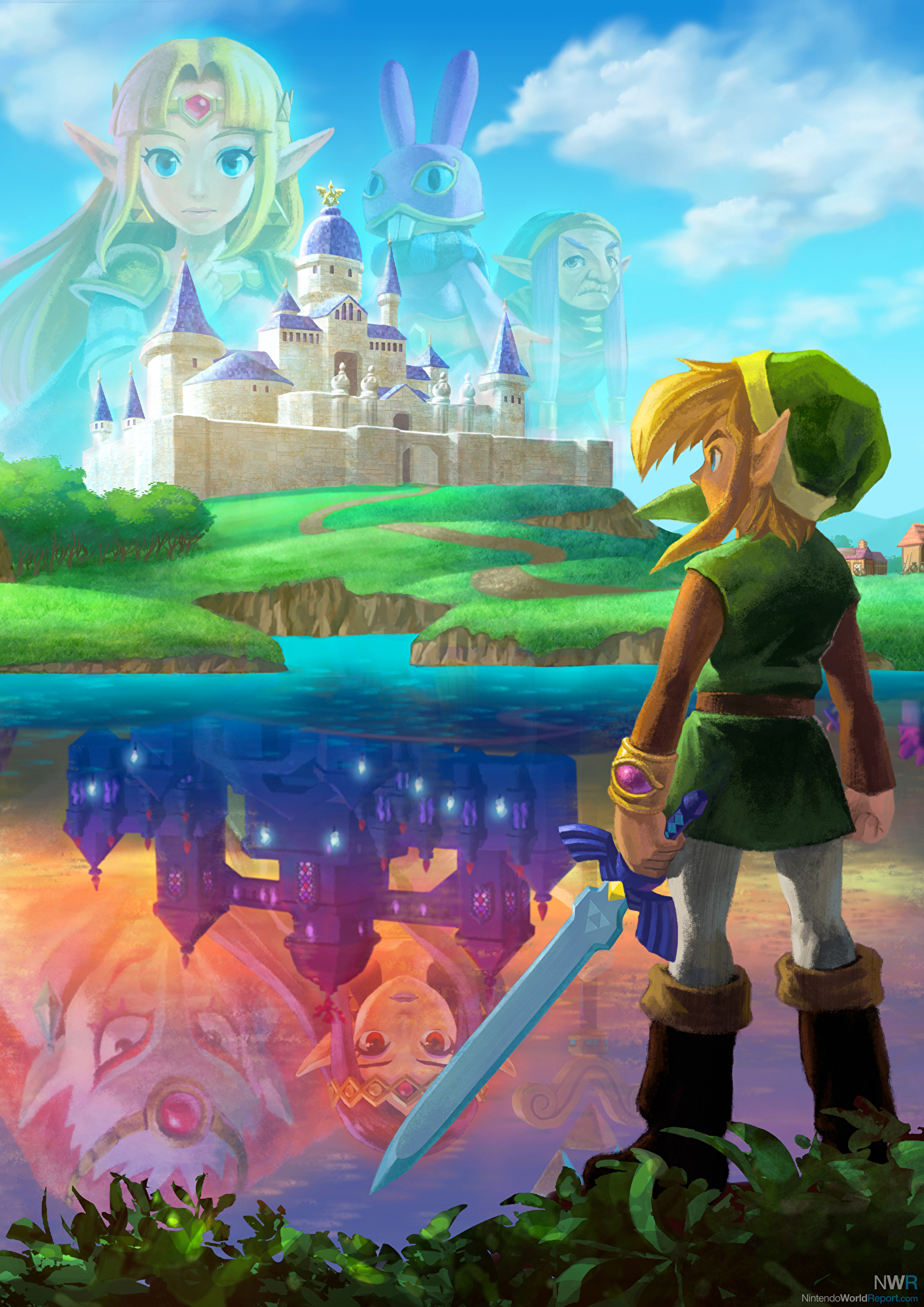 Taking place hundreds of years after Link to the Past, the story focuses on an evil wizard named Yuga who wants to revive an ancient power by capturing the seven sages (+ Zelda). Essentially, it’s the same setup for Link to the Past, and there’s a winking nod to the fact that this all happened before. This is par for the course in the Zelda series, but luckily the characters you interact with and the world you explore make the tried-and-true story sing. Both Hyrule and the newly introduced Lorule feature well-written, colorful characters, some of which are inspired by the cast of Link to the Past, including the latest in the line of Sahasrahlas and the new rapping bomb maker.

The major change-up is the usage of items. For the most part, you no longer find items in dungeons. Instead, you rent or buy them from a weird rabbit-ear-wearing human named Ravio. The mechanic opens up much more of the game at an early stage. You can, if you scavenge enough rupees, get almost every item before the second dungeon. That also makes it so you can access dungeons in whatever order you want. When you reach Lorule a few hours into the adventure, A Link Between Worlds becomes the closest the series has gotten to granting the freedom of the original. The world opens up in a marvelous way, and the second half can be played along any path you desire. Because of that, you can explore nearly every area of the world whenever you feel like it. 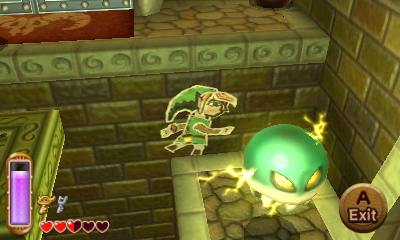 Aside from the way you use items, the general structure follows the blueprint of Link to the Past closely, even featuring spectacular musical remixes and an interesting art style that harkens back to the original. You go to three dungeons in Hyrule that recall the opening portion of the SNES masterpiece, and then you go to the alternate version of Hyrule called Lorule, where you battle your way through seven more dungeons, all located in roughly the same areas as the seven dungeons in Link to the Past. The dungeons themselves are all completely different, though, and with the need to hide an item completely removed, the dungeons feel faster and less bloated. The “aha!” moment of discovering a new item happens as you enter, not halfway through, making each dungeon a concentrated dose of combat and puzzles that is fantastic, fluid, and fun. Add in the ability to merge with walls to become a movable Link painting and any residual familiarity is washed away entirely.

A variety of side quests and mini-games are nestled throughout, with the best one being the hunt for Maiamais. Hidden throughout Hyrule and Lorule are little octopus-looking creatures that are hidden in trees, walls and more that, when you collect enough, upgrade your weapons. It’s like the seashell quest from Link’s Awakening but more rewarding and more entertaining. The mini-games aren’t as engaging, but they serve as a fun way to earn rupees, which are instrumental in progression since items cost money to rent or buy. There’s even a really fun StreetPass mode where you duel Shadow Links that are created by the people you pass by. 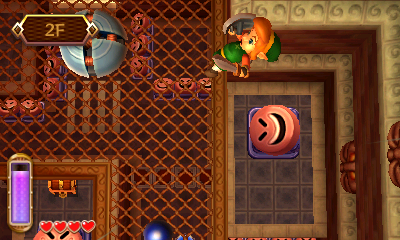 The excellent dungeons and fun distractions are made even better with the spectacular gameplay and controls. Link Between Worlds is fast paced and filled with content. It has an ease of play that no recent Zelda game has even come close to matching, all while lacking a hampering tutorial. The game even makes exploration simple, as you gain the ability to warp to different points on the map quickly. The easy-to-read map itself can be marked with pins to remind yourself to check that area out later.

A lot of folks consider Link to the Past to be the greatest Zelda game, if not the greatest game of all time. A Link Between Worlds matches that masterpiece every step of the way, creating one of the finest Zelda games since Link to the Past. Since it follows the roadmap so closely, it’s not quite as fresh as the SNES classic was in 1992, but that doesn’t make it any less of an amazing experience. A Link Between Worlds is a delightful adventure that hits every high note a 2D Zelda game has ever produced while creating many new hallmarks of its own. In a year filled with quality 3DS games, A Link Between Worlds is another fantastic entry on a system that is quickly becoming home to a number of instant classics.

Great review. I've still yet to play the DS Zelda's but it looks like I'll end up playing this before them. The game structure sounds so fresh and new.

"Hews too closely to Link to the Past's world and structure" is a pretty major con for me.  That was my concern from the beginning.

I don't typically buy games around this time of the year because my birthday is in December and between that and Christmas I leave things open in case I get games as gifts.  When I suggested the idea of "saving" this game for my birthday or Christmas my brother said "the hell with that" as he doesn't want to wait and will just buy the game himself on the release date.  I'll probably just borrow his copy anyway so if the similarities to LttP turn me off at least I won't have to paid for the game myself.

It's less of a concern for me. I only played Link to the Past once and that was at least 5 years ago and could be up to 7 years ago. While I can still remember some area about the game, I don't think I'd find the similarities too off-putting. Unlike Twilight Princess. I played Ocarina of Time like maybe 8 months or so before playing Twilight Princess and while enjoyed them both, a lot of times in TP, I was struck by how similar it was to OoT.

This feels like it could be the Zelda game I've really wanted for the past 10 years.  A Zelda game with the immediacy and fast pace of the 90s 2D ones sounds perfect.

It's less of a concern for me. I only played Link to the Past once and that was at least 5 years ago and could be up to 7 years ago. While I can still remember some area about the game, I don't think I'd find the similarities too off-putting. Unlike Twilight Princess. I played Ocarina of Time like maybe 8 months or so before playing Twilight Princess and while enjoyed them both, a lot of times in TP, I was struck by how similar it was to OoT.

I had that problem in TP as well and I know LttP's overworld really well.  It's a game from my youth so its layout is embedded in my skull.

This feels like it could be the Zelda game I've really wanted for the past 10 years.  A Zelda game with the immediacy and fast pace of the 90s 2D ones sounds perfect.

Yes it does. The reviews of this game are making me seriously consider getting a 3DS, which only briefly happened once before when 3D Land came out.


And that's an interesting point about the pace. Perhaps Phantom Hourglass/Spirit Tracks earned some of its ill will by significantly slowing down the momentum of the handheld Zelda titles.

Preordered from Newegg. I hope it gets to me on friday because I shipped to work. A weekend of everybody else playing this will be hell.

Does anyone know if this will available to download at 12:00 PST or 9:00 PST?  (Do they go by EST or is it midnight everywhere?)

They go by EST. 9pm for you west coasters.

Currently downloading A Link Between Worlds as I type this!

I received this game as a gift for Christmas and have been trying really hard not to burn through it as quickly as possible. I'm going to be really bummed out when it ends, it's been a blast.

I'm in the closing phases of the game (with one more dungeon to go); I've found all the Maiamais, purchased all items, found all the bottles, unlocked all the upgrades, and generally rung the game of all it has to offer. It's without a doubt my favourite game of 2013.  It feels snappy and immediate in a way that more recent Zelda game's haven't, the music is exceptional, the dungeons feel cohesive and connected, the over-world is brimming with secrets, characters, activities and places to explore, and overall it's just a joy to play.

I do, however, have a few minor gripes that I would like to see addressed in any potential follow-up.

I had one niggling issue with the controls (which on the whole are fantastic), which is that although Link is controlled with an analogue input he can only use items and abilities in the 8 cardinal directions. I found this to be particularly frustrating when using the dash or the Fire and Ice rods. I would have loved to be able to hold the dash button down and run in circles, or to stand in the middle of an arena and quickly and precisely launch pillars of fire at approaching enemies by aiming the rod rather than having to manoeuvre link so that his diagonal attack lines up with an enemy. Perhaps the enemies and their attacks patterns would have to be adjusted accordingly, but the increased accuracy and fluidity would benefit the combat.

I also wish that the same energy and care that was given to the audio had also been expended on the visuals. Many reviewers have commented on the fact that in motion and on the 3DS screen ALBW looks much better than screenshots and videos have been capable of showing, which is true; but I still maintain that ALBW's art style is the NSMB of the Zelda series. It's not an ugly game, it's just an incredibly generic looking one. It might just be a personal preference, but I think A Link to the Past (a 22 year old game) looks orders of magnitude better than ALBW. In the area of art, there is definite room for improvement.

Lastly, I hope that Nintendo now use ALBW as the basis for a brand new and thematically different Zelda game. We've had an Ocarina of Time remake, we've had a Wind Waker remake, and now (in a manner of speaking) we've had an A Link to the Past remake. ALBW, with it's shake up of the structure and formula, has proven once again that the Zelda series is flexible and capable of accommodating change. I would now like to see Nintendo demonstrate the same moxie when it comes to world creation, characters and story that they have in other areas. 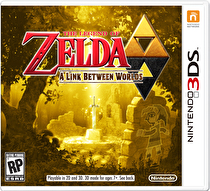