When dreams and reality fuse together, they become the next big thing on your handheld!

The Mario & Luigi RPG games have always brought a big smile to my face. With their bright style and lovely written scripts, they are experiences where I never stop smiling for a single moment. Ever since its debut title in 2003, Mario & Luigi: Superstar Saga, I have been looking forward every entry since. Despite some small complaints, I enjoyed my ventures through various landscapes and exploring what they had on offer. Mario & Luigi: Dream Team Bros. takes the fundamentals of what makes previous games so good and freshens it up for newcomers and veterans alike. The result is a wonderful mix of puzzle solving and role-playing action, which many will be able to enjoy.

The game opens as Mario, Luigi, Princess Peach and a crew of toads are invited to a place called Pi'illo Island. The island's proprietor, Dr. Snoozemore, promises them a relaxing vacation, which seems like an offer you can't simply refuse. Once on the island though, the good professor is nowhere to be seen and the gang decides to go and check out the sights. They see characters like Broque Monsieur from the last Mario & Luigi game, which acts as their tour guide for the place. Starlow is also back with a guiding role, as she helps the duo once again to clear their goals. After some dialogue and lengthy battle introductions later, which drag on for a bit too long, the plot kicks in and things get a little more serious. 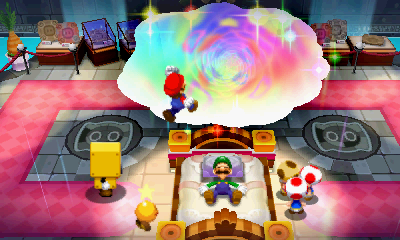 Mario and Luigi find a magical pillow where Luigi decides to take a nap. This series of events opens a portal to the dream world and in a flash Princess Peach gets taken away by a mysterious force. Mario may find himself all alone at first, but then gets aided by the dream form of his brother, who is called Dreamy Luigi. Not long after they meet with Prince Dreambert and receive their main objective: Dreambert wants to save his fellow Pi'illos, while Mario and Luigi want to save Peach at all costs. They will have to work together in a brilliant story filled with loads of twists and turns!

Dream Team Bros. has two different play styles while you are exploring various areas. When you are walking about in the real world, you are exploring 3D areas and full on interact with the environments and characters. In the dream world, it is completely different experience as you explore 2D stages. You will encounter fewer characters to chat up with and they consist of simple yet fun platforming sections. These sidescrolling parts cause the game to have more variety and it is a nice change of pace from exploring the larger sections.

While uncovering the dream and real worlds, you will gain many new abilities to overcome various obstacles along the way. You will do the usual jumping and slamming around with the hammer, but you will also, for example, change up into a ball to reach higher spots on the map. Within the dream world, Mario needs Luigi's endless imagination to up with clever ways across devious puzzles. Mario will be standing on top of a stack of Luigi clones early on, who can perform powerful jumps and crush enemies in a split second. These “Luiginary Works” also make great use of the touchscreen. You can use Luigi's mustache in real life to speed up or slow down time in the dream world. Another interesting mechanic is when Luigi has to press buttons to make things happen, like changing up the gravity in the environments to overcome an obstacle. The great part about the abilities is that the game continued to present new ones, even in the final few hours of the journey. This kept the game feeling fresh all the way through. 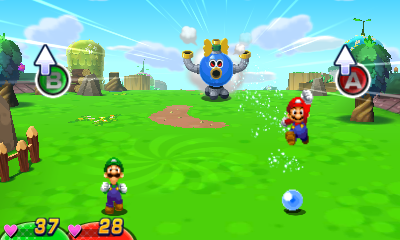 Just like the previous games, Mario & Luigi: Dream Team Bros. puts a lot of focus on the battle system. By touching the various enemies, a strategic turn-based battle will ensue in which you use jumps, hammers, items and special Bros. Attacks to defeat enemies. In these battles, timing is everything and you will have to experiment a bit to get the hang of it all. Good timing is rewarded with more damage, which makes later battles feel much smoother. The Bros. Attacks make a fine comeback, though, just like Bowser's Inside Story, these need to be earned by collecting 10 Attack Piece Blocks in an dream or real area. Mario and Luigi have, in the real world, their own set of attacks that need to be done together to succeed.

In the dream world battles, Mario is once again all on his own but he’s guided by the aura of Dreamy Luigi. Bros. Attacks are here replaced with Luiginary Attacks and use a Luigi filled army. My personal favorite was the Luiginary Hammer, where Mario holds up a hammer and the Luigi army collectively builds a bigger one around it. By keeping the balance in check and letting all the Luigis gather, you will deal massive damage to opponents. In these sections countering attacks are a greater priority, and you can do it with more freedom than in the real world. Some counters may let you walk about on your side of the playing field, while doing jumps and hammer strikes.

By completing battles, you can raise Mario and Luigi’s levels, allowing you to raise your defense, shields, or Hit Points (HP). If you reach certain levels, you are rewarded with rank ups; these new ranks will give special rewards. Using these rewards, you can jump 125% more effectively, level up quicker, or slice the Battle Points (BP) needed for Bros. Attacks/Luiginary Works completely in half. Next to gaining experience, equipping gear like new jumping shoes, hammers, or suits will raise stats significantly. There also the badges, which have a dedicated bar on the touchscreen. Filling up this bar requires you to perform flawless attacks and will grant you special options, like regaining some health or dealing additional damage to your enemies. 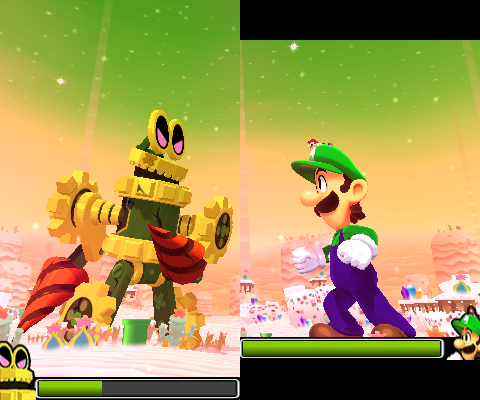 The big battles from Mario & Luigi: Bowser's Inside Story also make a thrilling comeback, as you use Dreamy Luigi in a few sections to beat some tougher baddies. In this style, you are supposed to hold the Nintendo 3DS like a book and perform attacks by swiping or tapping on the touchscreen. In some sections you will even use tilt functions in exciting ways, which made smile from ear to ear; the fact that it doesn't happen often makes it something to look forward to.

If you need a break from the adventure, there is a still plenty of stuff to do. You can go off the beaten path and try to find all the hidden Pi'illo citizens spread across the island, done by entering special dream sections to save them, or check out the various minigames available. In the Pi'illo Castle, there is even a special Boss Rush mode to enjoy for some sweet rewards. This section includes all the regular, dreamy and big battle versions in a remixed format, so it is a great way to test your skills. The game takes roughly 35 hours to complete and this is without sinking too deep in the extra stuff; quite impressive, to say the least.

Despite the additional challenges you have to face, it must be said that Mario & Luigi: Dream Team Bros. is a great game for beginners. After failing to complete a boss battle or minigame an easy option presents itself. It allows health regeneration and a power boost against bosses or an alternate set of challenges in the minigames. 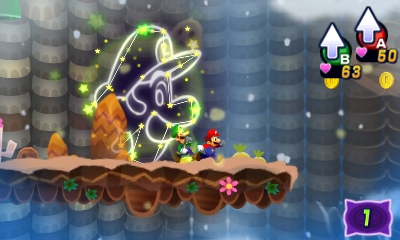 The game looks stunning on the Nintendo 3DS, with great environments and texture work. The characters are completely sprite based, and  I fell in love with them from the start. The 3D effect isn't always great, as it feels subtler in some areas. It isn't anything bad in particular, but it doesn't pop as well as some other Nintendo 3DS games do. The soundtrack is absolutely wonderful with beautiful orchestrated tracks that just add to the charm. It’s a very tightly knit package, and even offers a fun jukebox mode after completing the game.

Mario & Luigi: Dream Team Bros. continues the streak of grand titles on the Nintendo 3DS and completes the trifecta in the Year of Luigi quite well. The experience is rock solid, except for the slow burn in the first few hours and a sometimes-disappointing 3D effect. For the rest, you will find great enjoyment in the various gameplay elements, abilities and clever ways the game progresses. It is a fun filled adventure through and through, which should keep you occupied for a long time. Best entry in the series yet? Without a doubt. But it also appeals to newcomers, making it an easy recommendation for anyone.

My first ever imported console was an American 3DS. The option over picking up the console locally from Australia is certainly bloody paying off in spades, eh? *sits on arse for another month*

The box art reminds me of Hitogata Happa.

I love the Mario&Luigi seris hopefully they do are wario bros seris! (LOL) 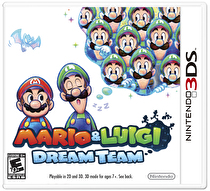