Like a real rabbit, this game is adorable, but stinky some of the time.

Kung Fu Rabbit poses a question: Is it worth conquering difficult platforming challenges to save bunnies? The answer is yes, most of the time. In an often fun, sometimes slow adventure, Kung Fu Rabbit follows the escapades of a rabbit saving his bunny disciples of kung fu from the Universal Evil, a race of alien creatures that resemble black blobs.

Platforming is satisfying in Kung Fu Rabbit, with a jump mechanic that reacts well to how long you hold down the button, which comes in handy when you’re jumping from wall to wall, avoiding death traps and enemies. When Kung Fu Rabbit becomes difficult, it offers up a fair challenge. Since you die from only a single hit, attacking enemies and collecting carrots leave you little room for error. 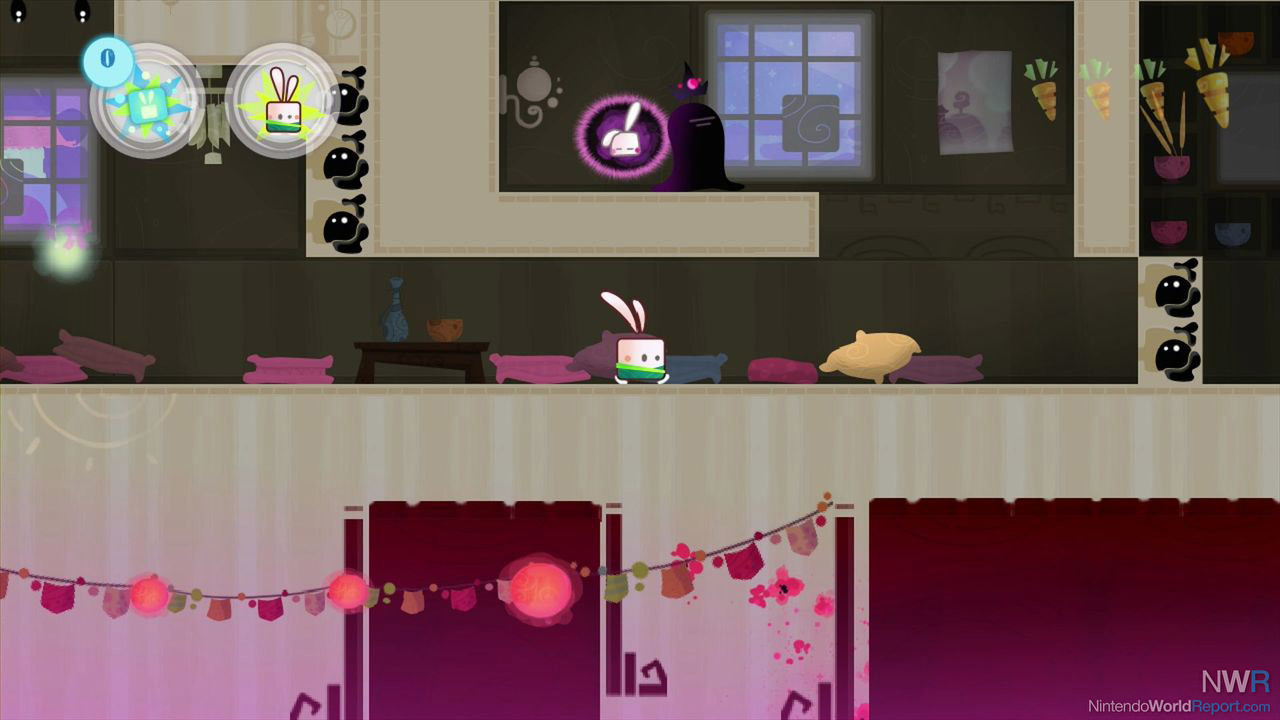 You can collect four carrots in each level, three normal carrots and one regenerating golden carrot. As the game goes on, their locations become more difficult to reach. You can trade these carrots for helpful items that aid you by eliminating enemies, muzzling spitting foes, or offering other helpful actions.

A lethargic start is Kung Fu Rabbit’s chief problem. Its first 20 levels offer little challenge, making the beginning of the game rather slow and laborious. Repetitious environments and music also hold back Kung Fu Rabbit. With only a couple different backgrounds, a dojo being the most common, and only a few audio tracks, playing the game for a length of time becomes tiresome.

Kung Fu Rabbit includes a decent amount of content, with 60 standard levels and 20 bonus levels. When you complete the first 60, you unlock the “hardcore rabbit” levels, which are harder versions of all 80 levels. That means more enemies, carrots that are harder to find, and a lot more dying. Finishing the first 60 levels took me close to three hours, which means you can expect at least a couple more hours of gameplay if you aren’t sick of the recurring settings.

Kung Fu Rabbit is a decent and often enjoyable experience. Though some aspects hold it back, it is still worth a look as a platformer.

Sometimes we get multiple copies for multiple regions, being the important influential member of NWR that I am I wrote the North America one.

I hear ya. I'm sure I'm not alone in liking multiple reviewers from one site/mag/etc. I think I remember just that happening from time to time here, possibly in the early Planet Gamecube days? Anyway, great work as always. :)