Fails to make a splash.

Throwing rocks, coins, and other objects down wells is oddly satisfying. The combination of not knowing what's inside the well or how deep it goes, and hearing that short but sweet sound of objects hitting the water is an experience not easily replicated. Poisoft tries to, though, in Kersploosh!, its latest 3DS eShop release. While its interpretation of what actually goes on inside the well is interesting, you won't spending much of your time there. 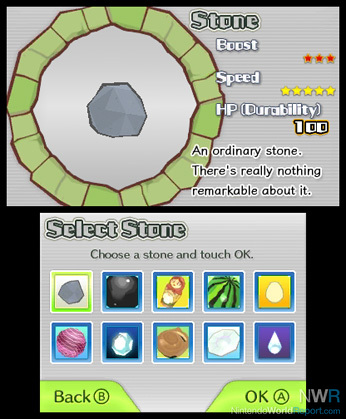 The point of the game is simple: you toss a rock, rubber ball, or various other unlockable objects down a well, using the Circle pad to control the object as it descends. Inside the well are various obstacles you have to avoid, such as wooden planks, pizza, Japanese sliding doors, cookies, and more. Hitting these obstacles chips away at your object's health; when it reaches zero, it's game over. Donuts inside the well boost your speed if you slide through their center, and balloons replenish some of your falling object's health. 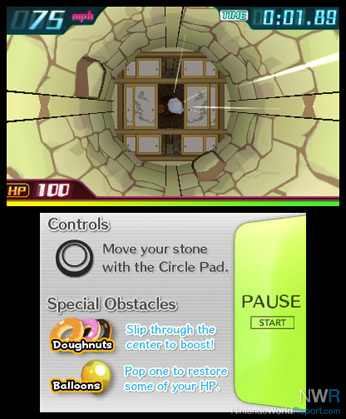 While the idea and presentation of such a simple concept is engaging, the execution left a lot to be desired. You only use the Circle Pad, which I found too sensitive to play properly. Even the slightest nudge in any direction sends your object speeding toward the well’s edge if you're not careful. I would've preferred a control method that used the bottom touch screen, as it's not used for anything other than displaying the control method, and what the donuts and balloons do. The recycling of obstacles throughout the game's 10 wells, which you can blow through within an hour, also hurts the presentation. You can unlock eight other objects to throw into the well, but in my experience with the game, they offer little to no benefit in terms of getting to the bottom any faster than the default rock. 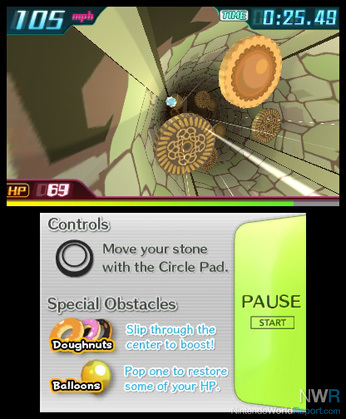 The game’s visuals are solid, but the glasses-free 3D got in the way of sensing depth, due to the motion lines constantly traveling upward, not letting me properly see what was coming. Kersploosh! also uses only one techno song for every stage, and while the fast-paced track works to illustrate free fall, it's nothing memorable. 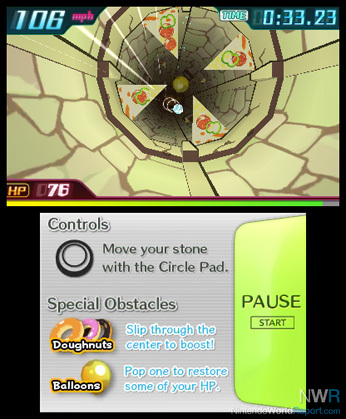 Kersploosh! has some opportunities for fun, but the game is over before its concept gets a chance to shine. I‘d love to see a more fleshed out version of this unique game in the future. Until then, I'll be tossing quarters into the local wishing well to see if that'll ever come true. Let's hope they get past all that pizza.

How haven't you noticed the big difference in speed between many of the objects? Are you seriously suggesting you don't notice the huge difference between the Rubber Ball and the Mutagen?

Would you also criticise Zen Pinball 3D because you can experience every level within an hour?
I do wish the later levels were harder to unlock though, but clearly the inclusion of the indestructible rubber ball shows that the main draw of this game is highscore chasing.
Therefore the overlookation of online is inexcusable.

I'd argue that the circle pad controls aren't sensitive enough. I also love the 3D, but I can see how some may find it distracting.

How haven't you noticed the big difference in speed between many of the objects? Are you seriously suggesting you don't notice the huge difference between the Rubber Ball and the Mutagen?

I've noticed the differences between the objects, just not in the sense of having any clear advantage over just the plain old rock, other than making it easier/harder to get down the well. No improvements in time. I don't enjoy difficulty that stems from you being crippled.

Would you also criticise Zen Pinball 3D because you can experience every level within an hour?

No, because part of the charm of games like pinball is seeing how long you can go, and how high you can get your score. The wells in this game are of a finite depth, so it's hard to see myself coming back to them, when my result is essentially going to be the same, if not only SLIGHTLY better every time. If there was an endless well, then things would be different.

Yeah, this isn't the type of game that you just play to see the ending in the shortest possible time. The reviewer totally misses the point.

Was I expecting much fromthis?  Not really.  Was I going to buy it regardless based on the name alone, plus the fact he's pretty much been turning into a meme in his social circles?  Absolutely.

Yeah, this isn't the type of game that you just play to see the ending in the shortest possible time. The reviewer totally misses the point.

No, I got the point. I'm not against high score chasers at all, as some of them like Tetris, Bookworm, Kirby's Pinball Land, etc. are some of the most played games on my 3DS. But when the game doesn't really have a hook, other than to SLIGHTLY increase your time, I'm not interested.

No improvements on time? The Mutagen knocked 17 seconds off my best time in First Fall! That 'rock' really frustrates me though, so I'm not doing any other well with it.

I get what you mean about Zen Pinball. I was considering whether to remove that question, but I left it in to see what you said.

Though I can see how this wouldn't be everybody's cuppa tea, I'm really enjoying it. The sense of speed and depth is really accentuated by the 3D, and some of the extra rocks/balls change up the experience a lot in my opinion. (That Nesting Doll is tough -- haven't landed her at the bottom once yet.) At $3 it's an easy recommendation from me.