Pushmo was the first 3DS eShop game to demonstrate the potential of Nintendo’s download platform. The Intelligent Systems-developed block-pushing game was deep, challenging, and addictive. The sequel, Crashmo, is surprisingly different despite having the same general presentation. Instead of the mammoth monoliths you had to solve in Pushmo, Crashmo generally presents simpler structures, though they are, for the most part, far more difficult. 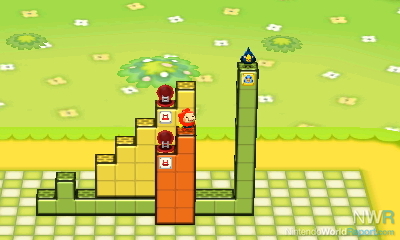 The primary mechanic tweak is that blocks now react to gravity and fall to the ground when they lack support. Additionally, you have full camera control and a much bigger area to move the blocks around in. With these additions, Crashmo is basically Pushmo with fewer limitations, freeing it up for crazier, more mind-bending puzzle solutions. This quality detracts from the grandeur of the levels, though, as most aren’t the sprite-based murals that the majority of the original’s puzzles were. Instead, they are generally indeterminate groups of blocks, but still, that doesn’t tarnish the Crashmo experience. 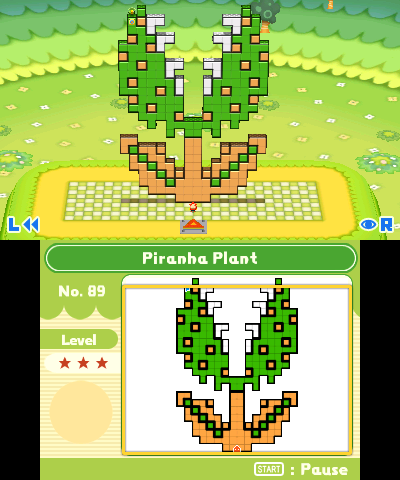 The main part of the game, containing 100 puzzles, is shorter than Pushmo, but more secrets lie in wait for the brave souls who finish it. You must complete a few sets of tutorials at the outset, but Crashmo hides most of its in-depth learning in an optional training area. Intelligent Systems is also releasing new levels via QR codes weekly, and you can always check out what boisterous puzzles other players make by scouring the Internet for created levels.

Crashmo’s difficulty and more abstracted play style may turn off some Pushmo veterans who crave more structure in their block puzzles. However, with refined gameplay and a wealth of content, the new game in the young series is still one of the best games on the 3DS eShop.

We'll be picking this up soon. Why there is no official site for people to upload Pushmo and Crashmo levels is mind boggling to me.

I liked Pushmo, but I like this so much better, and I'm not sure why.

We'll be picking this up soon. Why there is no official site for people to upload Pushmo and Crashmo levels is mind boggling to me.

no miiverse for 3DS yet. Also since you can just save your own and post online and save to sd card / scan the file its pretty easy to share the levels

After 3D Land, Fallblox is perhaps my second favourite 3DS game. Such an incredible puzzle game. The final stages (and I mean the FINAL stages) are becoming a little too arduous for me, but I've put over 20 hours into the game and am more than satisfied.

I love that they threw all the "tutorial" levels into an optional area. This frees up the main game to get more challenging more quickly. Definitely an improvement.

So despite my previous post, I'm now 40 hour in and only have 4 puzzles left to overcome! I'm so tempted to look at a guide but that would of course take away from the satisfaction (and frustration). I'd love to be able to say I beat them all by myself.

I love that they threw all the "tutorial" levels into an optional area. This frees up the main game to get more challenging more quickly. Definitely an improvement.

And yet the unskippable in-game tutorial spans way too many levels.