Game Freak's original eShop title is worth exploring, but will certainly divide people.

A month ago, I shared my first thoughts on the new Game Freak title Rhythm Hunter: HarmoKnight. The eShop game saw its debut during the Nintendo Direct conference in August, and after seven days of waiting finally reached us. Has my opinion changed much after playing it to completion? Yes and no. 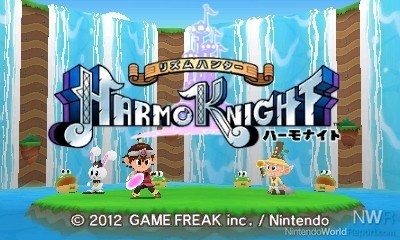 The story takes places in Harmonia, a magical kingdom where music reigns supreme. Everything is blissful and happy in the world, till the day the Noizoids attack with the intention of breaking the peace of the realm and bringing chaos to Harmonia. Gagan, the leader of the invading army, captures the princess and seals her away in his fortress surrounded by lava. The young boy you control, Tempo, takes the initiative to save her, and his adventure leads to various parts of the kingdom, including cities, beaches, and guitar-shaped islands.

Rhythm Hunter eases you in and gives you the chance to learn the standard moves of the protagonist. Two buttons drive the action: the A button for attacks, and the B button for jumping. During the musical stages, you can attack many parts of environment, which adds an extra beat to the music. The regular beats of the music fall under the enemies, and you have to hit them with pinpoint accuracy. This is easier said than done, and takes a minute to get used to. If you get the hang of it, the game rewards you with notes spread around the course that determine your final score. The notes form an additional layer of the music and are important to collect if you want to hear the song properly. 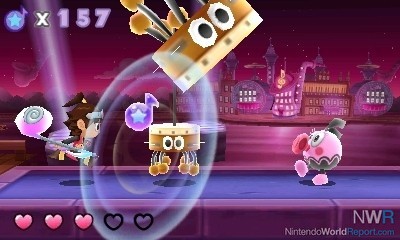 The same control method is used for a variety of exciting boss battles, though in these instances you have to memorize patterns before performing them. Initially, this is very easy, and a nice break from the usual gameplay. However, later levels also ask you to avoid parts of the environment and incoming obstacles. It is here the true difficulty of these segments lies, since the game is trying to do as much as possible to make you screw up. These might be harsh terms, but it makes the game exciting and memorable. This is more clearly shown in the game’s several mine cart stages, which put you in some rough spots and tricky situations. You use the standard control methods here, but the action is speedier and surprises you sometimes with enemy fire.

Aside from Tempo, two other characters make occasional appearances. Lyra, an agile woman, uses arrows as her method of attack. Instead of jumping, she ducks to avoid obstacles that can't be hit. Jinbei, with his trusty monkey sidekick, Cymby, makes drum music that destroys close enemies. I wasn't too fond of how these additional characters were given small portions of levels, and weren't given time to be fully fleshed out. In some places, their inclusion made the experience a bit disjointed and caused for a slower flow. I love that they are there, and they break up the gameplay well enough, but who knows what role they could have played with more time spent on them. 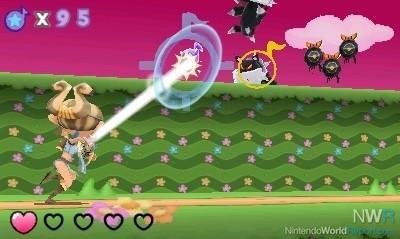 HarmoKnight isn't a long game. If you dedicate yourself to playing and don’t go back for high scores, the experience isn't longer than five hours. After it is all wrapped up, you play either the same content again or sped up versions that provide just a little more challenge. You won't get any major rewards for doing so, and the option certainly isn't for everyone, but it is a fun distraction nonetheless.

HarmoKnight’s presentation is something to see. The story features comic book cut scenes that immediately grab your attention and are a lot of fun to watch. The aesthetic during gameplay carries a stylish and colorful 3D look that makes the game an enjoyable ride from beginning to end, even if you fail in some places. The soundtrack is quite varied and features some lovely tunes. The game combines its gameplay and music in seamless fashion that benefits both.

Rhythm Hunter: HarmoKnight is a big departure from everything Game Freak has done in the past. The game cares about its concept very much and delivers a fun, interesting experience all the way through. It isn't the longest game, but if you like going for high scores, Rhythm Hunter should certainly keep you invested. If you like rhythm games, consider this a blip on your radar.


Though I don't like how ジンベイ is romanized as "Jinbei".  I feel it should be "Jimbei" (as that's the name of an actual drum).