A simple concept, fleshed out with care.

A game like Theatrhythm Final Fantasy was inevitable. Given the series' ever-expanding catalogue of exemplary and instantly recognizable soundtracks, the real surprise may be that Theatrhythm, a game dedicated solely to the series' music and the people who cherish it, didn't come about sooner. With such a singular focus and massive install base, though, it's not hard to envision Theatrhythm (or a similar game) setting a low bar for entry and refraining from letting anything too strenuous get between players and the expected aural reward.

In short: Theatrhythm more than manages to have it both ways, with an optional curve in difficulty that makes it as dense an experience as the player wants. Players looking for little more than a low-key tour through a handful of their favorites can have that experience (and a little more) without breaking a sweat or worrying they don't have what it takes to beat "Dancing Mad"; those with a deeper familiarity and/or an appetite for rhythm-based challenges can be more then fulfilled. 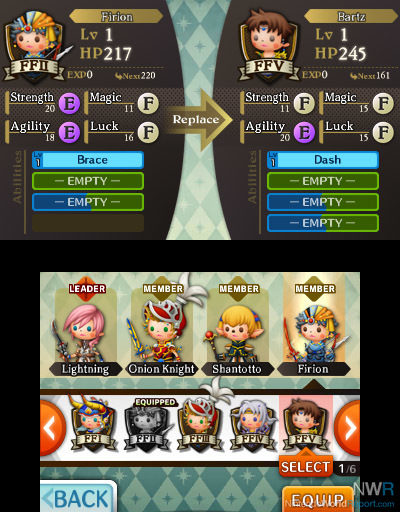 The thrust of the initial Theatrhythm experience comes through playing the Series mode, which takes the player through the numbered FF games in five-song chunks featuring each gameplay variant. Even while playing on Basic difficulty (the lowest, and the requisite during your first pass through Series mode), it's easy to see the common threads linking each game's soundtrack to the others. As a backing to the events of its respective title, each hits the same stable of beats: a calm, wistful track for the Field Music Stage; one with speed and gusto for the Battle Music Stage; something with pomp and centerpiece qualities for the Event Music Stage. Final Fantasy as a series covers a broad musical range (from low key to aggressive; from melodramatic to euphoric), and Theatrhythm mines that quality well in its playable adaptations. EMS tracks play over vignettes of gameplay and cut scenes from the respective title, a combination that, when played, is not unlike walking through a scrapbook; BMS tracks attack your party on four separate lanes, simulating the battles they normally complement.

The first run through Series mode is more a sightseeing tour than a test of ability. The low-impact experience is the museum part of Theatrhythm, where players can move through each game's exhibit, occasionally pressing buttons to trigger well-known pieces of the past. The decision to funnel players through Series before loosing them on the thornier sections of the game is smart: it ensures each, regardless of skill level or intent to progress, receives the base Final Fantasy experience without consequence, and it acts as a warm-up for those who plan to come back and tackle Theatrhythm's two higher difficulty tiers.

If simply playing through each game in Series hits your Final Fantasy sweet spot, the 13 numbered entries available (not to mention the DLC) in Theatrhythm should be more than enough to satisfy. Post-Series, though, is where Theatrhythm blossoms. Playing the first mode unlocks songs in Challenge, where players can experience each track on the Expert (and later Ultimate) difficulty. The challenge and reward of the respective difficulties are akin to that of Rock Band or Guitar Hero: the higher you go, the more the game correlates notes you need to hit to the beats and flourishes of the song. The result, as in RB or GH, is a more authentic experience. At its best, Theatrhythm made me feel as if I was conducting an orchestra, or occasionally getting sword swipes in to match the beat and tone of a battle, which, as someone who enjoys Final Fantasy music, is about as much as I could ask for. 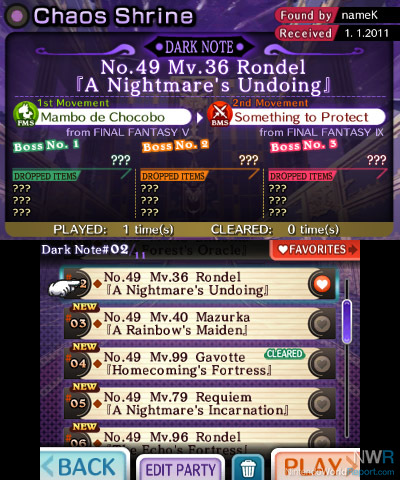 With dozens of songs and two additional difficulties, Challenge mode would probably have worked as Theatrhythm's endgame. That honor, however, goes to the Chaos Shrine. Featuring random pairings of progressively harder versions of tracks (known as Dark Notes), the Chaos Shrine experience is a game (and a grind) unto itself. The game's light RPG elements (a four-member party with relatively limited ability and item options) are also best utilized here. Each Dark Note features a FMS and a BMS, and outfitting your party with items or abilities to maximize certain stats is a necessity to reach, defeat, and claim the loot of the bosses present in each. Dark Notes also trump anything present in Challenge mode in the sheer stupidity of their difficulty (and, occasionally, how much fun they are to play). I personally played through about 25 Dark Notes, though Danny Bivens, who reviewed Theatrhythm not too long ago and has invested dozens more hours than I, can probably better attest to the fantastic lunacy of the Chaos Shrine. 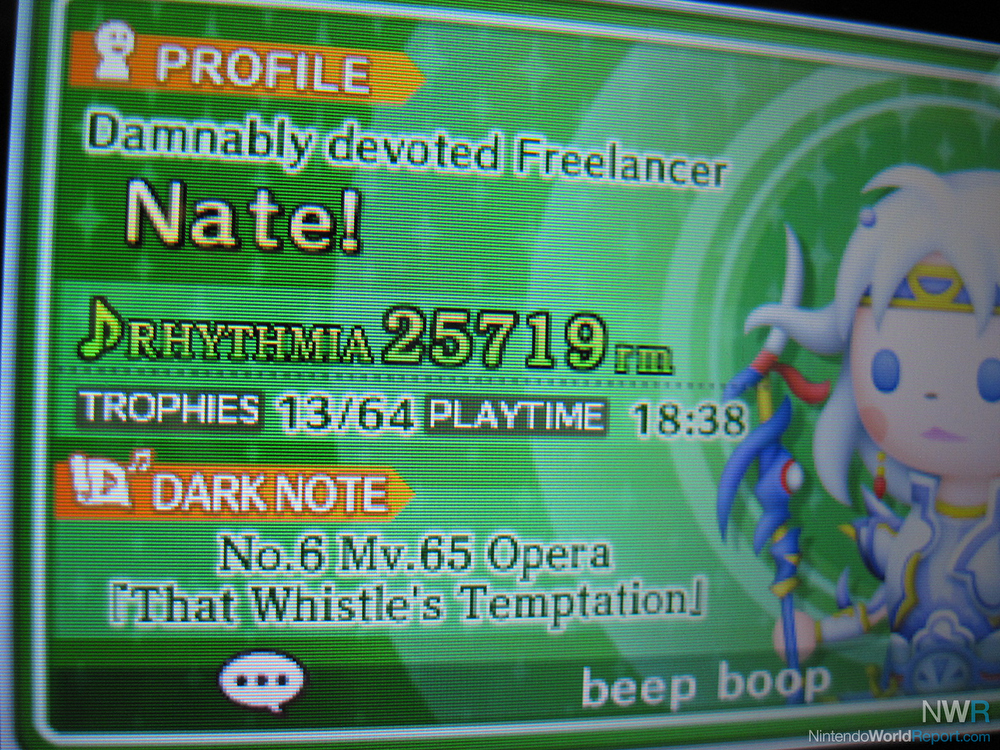 If you truncated Theatrhythm after Series mode, it would probably remain a decent (if limited in appeal) experience. The extent to which developer Indies Zero has built engaging and rewarding hooks into a largely nostalgia-fueled rhythm game with only three input variants, though, is commendable, and makes Theatrhythm far harder to put down than you might think. The size and pliability of the Final Fantasy music library ultimately allows for the game's extensive and difficulty spanning interpretations of each track, and fosters as fulfilling an experience as almost anything else on the 3DS.

Is it worth 39.99 though?  Should I wait for it to go on sale on amazon later this year?  I kinda want some of the DLC, so paying 60+ for a game I'll play casually seems a bit much.  What benefits are there of me getting it now vs later?

Edit - sorry, didn't mean to sound so cynical.  Love the review, and it reinforces that I *WANT* this game, I just dont know if I want to spend too much on this game, considering I will be buying DLC.

Holy crap. Nate, I had the exact same by-line at one point. I changed it to some other damnably something-or-other later, though.


This game is a serious contender for my personal GOTY. That is how much I'm liking it so far.

I've put some time into Theatrhythm, and it's hard not to feel at least a little disappointed by the track list.  Some of the inclusions/exclusions just baffle me.  For instance, how in the hell do you have tracks like Waltz for the Moon and Eyes on Me representing Final Fantasy 8 but NOT include Liberi Fatali, the song that is probably the best-known track from FF8?  So far, that song's not even available as DLC, and there are odd exclusions like that from most of the games represented here (particularly from Final Fantasies 6-13).  And because most of the missing songs I really liked were neither battle nor "field" songs, they probably won't eventually come as DLC either.  And I would have gladly taken entries from Final Fantasies 10-2 or 13-2 over the garbage that is anything from Final Fantasy 2, but maybe those games will get DLC tracks.

Overall, though, the game has been enjoyable and the good songs that are in the game are really fun to play.  I wish there was more variety in what you do, though, especially after playing Elite Beat Agents recently.

Sounds pretty cool. Not being as familiar with Final Fantasy I'll probably be giving this a miss, but I can definitely see the appeal for those with a love for the series' music. I'd like to see a similar package with other classic games. Donkey Kong Country and Mario's music both hold a lot of nostalgia for me, but I'm sure there are several Nintendo series which could be mined for such a game.

I thought the Event stages where very EBAish.  I'm hoping they have DLC Packs and DLC for Final Fantasy non-mainline games.

While I like the game.  I find Expert for me to be pass or fail.  I either get an S or Fail pretty much.  Same with the Chaos Shrines I've done.  Get an S or Fail.  I now get a little upset when I don't SS Field songs.  Unlockable characters and like take a ridiculously long time to do.  I should have gotten 1 character before getting the credits.

Also has anyone gotten any songs in Chaos Shrine that are no where else in the game?  I got the Chocobo song.  Since this is my 3rd play through all the songs in the main game I'm fairly sure its not in their.

I keep thinking I would like a story mode ironically enough where I could take my party and just keep going.

If the game focused on FF4 and 6 I would surely buy it. I don't care about the other titles in the series which means  I wouldn't care about or recognize most of the other characters and songs in the game.

Sounds like a great game for those who love most of the series but for me I'll be waiting until tomorrow when Rhythm Thief comes out. 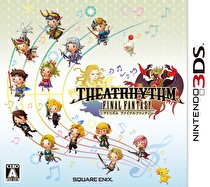