Zach and Neal want to be the very best, like no one ever was.

Neal Ronaghan: Pokémon Black and White, the start of the fifth generation of Pokémon titles, doesn't reinvent the wheel. After all, it doesn't have to because Pokémon has such a rock-solid foundation. What the new titles add is polish and freshness, the latter of which Pokémon usually lacks. It does that, chiefly, by adding in a whole new cast of more than 150 Pokémon, and for your trip through the main game, they're the only critters you can use.

Zachary Miller: Now, new Pokémon are nothing new - each new generation adds over 100 new monsters to the pot, but Black and White is nice because it's clear that there's a new design philosophy in place this time. For the most part, these Pokémon look sleeker and meaner, particularly at higher evolutions, and their type sets are not immediately obvious. The game's core mechanics are still in place, of course, but it feels like you're re-learning how to drive an old car. It's a nice feeling.

Neal: Sleeker can also apply towards the game's design as a whole. Game Freak has made grand strides to just give the game better pacing. Most long routes and caves have a character that will heal your Pokémon, thus limiting the amount of times you need to go back to the Pokémon Center, which also contains the Pokémart this time around. EAs usual, xperience points are scaled, meaning that if you have a lowlevel Pokémon, he'll gain more experience than a higher level Pokémon fighting the same foe. I had instances where I'd be training a new Pokémon and he'd grow multiple levels at once. It truly speeds up the pace of what is still a slow-paced game.

Zach: Some of the slow pace this time around comes from the fact that you don't really know the new Pokémon. I'm constantly swapping Pokémon in and out of my team because I want to see who is worthwhile and who is dead weight. The scaled experience, plus the new hold item - Lucky Egg, is a godsend in this regard. Game Freak didn't put as much effort into the menu system, however, which has needed an overhaul for a long time. In fact, they made it a little worse: the lower screen, by default, shows persistent online functionality (more on this later). You have to press X to get to the menu, and the items in the menu still don't automatically organize themselves within their larger categories.

What is new and nice, though, is that you can assign multiple items to the Y button, and then when you press Y, you can select the one you want.

It's split up into three sections: IR, Online, and Wireless. The Online, currently, doesn't work. The Pokémon Global Link, as it's called, will launch on March 30. We'll tell you all about it then. The IR is filled with a hodgepodge of ideas. There's the Feeling Check, modeled after Nintendo's Love Tester, that forces you to press your fingers on the touch screen and tap out rhythms to see how compatible you are with the person you're playing with. You can also trade, battle, and exchange friend codes.

The Wireless makes use of Entralink, which is another weird addition. You can use it in the post-game to collect older Pokémon, but during the main game, you can go into friend's worlds to complete quests that do things such as give you double experience for a half hour and make shops have sales. Like the case with most of the multiplayer, it is fun only for a little while unless you're really into world of Pokémon.

Zach: It's pretty clear that Game Freak is being progressive about Pokémon online, which is refreshing. Maybe by the time we get to Pokémon 3DS, we'll get that long-awaited Pokémon MMORPG. Neal and I tried to play online, but kept getting the same firewall-or-specific-router-ports error codes. I'm betting that's why Game Freak bulked up the local multiplayer features, which is appreciated, but it still sucks that Nintendo's half-broken DS connectivity problems hold the game down.

The graphics are a new aspect to the game. They'rebeautiful. The overworld is more detailed than ever before, there are lots of rotation effects, and the games feature not just a day/night cycle, but seasons actually change in-game every month. Seasonality will affect what Pokémon you find, what routes you can take, and even what some Pokémon look like (think Arctic hares or foxes). It's crazy!

Neal: The graphics are really stunning at times. There's one moment early on that was disturbingly epic and awe-inspiring for a Pokémon game. All of the little particle effects and visual tricks that are present courtesy of the 3D upgrade to the environments are wonderful. The music features a lot of the same tunes from previous games, but the towns have new songs that are rather excellent.

In general, Pokémon Black and White feel more like a regular RPG than ever before. The story moves briskly, and it seems like you're bouncing around from story event to story event more than ever. There are even some minor twists and turns along the way.

Zach: For the first time in a Pokémon game, I actually care about the story. The bad guys might dress like waiters at Medieval Times, but they actually seem to be up to something and I'm genuinely interested in it. I also really liked the music. I think all the battle music, be it against a wild Pokémon, a trainer, or a "boss", is new or at least heavily modified.

Let me bring up the "new" battle animations for a second. They're not anything to get excited about. The Pokémon switch between three or four frames of animation for the entire battle, and that animation may speed up depending on the attack they're using. It's nothing revolutionary. I should say here that I miss the HG/SS trope of letting your lead Pokémon walk behind you. Why take that out, guys?!

Neal: When it comes down to it, Pokémon Black and White are the latest and greatest games in the series. In some respects, Heart Gold and Soul Silver best it, chiefly through the menu interface and nostalgia value, but all the additions and tweaks make it a very strong game. If you're into Pokémon, you likely already have the game. If you're not, then this game won't convert you. However, if you've been away from the series for a while, this might be the game to make a return to the series.

I am still early in the game (just got to Striatan City), but I am enjoying it. It really does look nice. I hate the menus though, they are a huge step backwards.

I am still early in the game (just got to Striatan City), but I am enjoying it. It really does look nice. I hate the menus though, they are a huge step backwards.

Seriously the menus are so hard to navigate. HG/SS had the best menus.

I am so in love with this game.

1) The Lucky Egg isn't a new item; it's just been incredibly rare before.

2) You can sort the items; hit the little green icon at the bottom of your bag

3) There is no 3; I just wanted to use another semicolon

Was just rushing in to say that the Lucky Egg item isn't new at all.  I have like 11 in my copy of Soul Silver that I pilfered off wild Chanseys.

Then I saw that Shaymin already beat me to the punch.  Bravo.

It's been nearly 4 years since I last delved into Pokémon, so perhaps it's time. If I'm responsible, I'll hold off for a while, because right now, I'm too busy, and the addiction could very easily set in.

I've hit about level 60 with my Emboar, and frankly, I'm finding it to be a real grind. They seem to think that having a doctor near the important parts of areas makes it okay to have a ton of trainers (which I feel bad for skipping even one) and a wild pokemon rate that is shocking compared to the older games.
It's also a little weird having to do something in each town before challenging the gym. But, I feel that I'm still just blowing through all these towns at rocket speed. When I got "Fly", I was just like "Well, I guess I can get this fossil vitalized . . . and then fly back".
But! This seems to be the best pokemon game in recent memory, and I am so happy that it's all original, brand new pokemon. I was dreading having to dredge through catching/finding 400 some pokemon. That was the worst part of playing Diamond, especially when I was so close to  unlocking the Pal Park.
Also, what's up with Nintendo recently and bringing their online functions up later than the game. I want to trade some pokemons without friend codes, but the service doesn't start until the 30th. I'm extra pissed because I had to hassle with killing my router's security just so my DS Phat could connect to WiFi, only to find that
1) No WiFi services besides friend code based stuff
and
2) My code could be found by just looking in the Pal Pad, which was my main purpose for going online.


Pokemon is so close to getting the formula right, soooooo close.

I still think the menus are clumsy, even without the sorting feature.

Also, our collective bad on the Lucky Egg. It's still worthwhile that they just hand it to you around gym 5, though. It gives people like me who just romp through the main story a chance to experience it.

It's not surprising you didn't realize it. The only way to get it was on wild Chansey, and it was extremely rare (not only were Chansey themselves hard to find, but there was only a 1% chance of running into one with a Lucky Egg).

It's not surprising you didn't realize it. The only way to get it was on wild Chansey, and it was extremely rare (not only were Chansey themselves hard to find, but there was only a 1% chance of running into one with a Lucky Egg).

To be fair, you can game the system to get rare held items.

For the second 'mon in your party, use something with the Frisk ability (lets you see what items a foe is holding) and the move Thief.  Make sure this one isn't holding an item or it won't work.

Then just run around in the grass and pilfer whatever you need to from the wild Pokemon when Frisk detects an item. 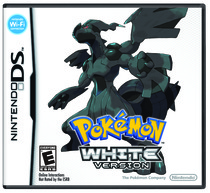