This game is deceptively challenging underneath its cute exterior.

Original Sonic creator Yuji Naka's original Windows Mobile game, called Ivy the Kiwi?, has been brought to Wii and DS in North America courtesy of XSEED. The game is about Ivy, a little bird who fell from the sky and when she hatched, she couldn't find her mother. It's up to you to sort out this lost chick.

The game is beautiful. Presented as a series of images in a storybook, the pencil-drawn world could have been printed on paper. The backgrounds vary as you progress through the chapters and light cheerful themes accompany Ivy's squeal of "Kiiiwi!" as you anchor and swing vines across the screen to move her to the goal.

Creating vines is straightforward, but controlling Ivy's direction is more difficult to master. Ivy can walk along the vines, but most often you'll be pushing her along with the momentum of swinging the loose end of the vine. Positioning needs to be perfect as mistakes are difficult to correct. There's no elegant solution for removing wrongly placed vines. Ivy is constantly on the move, and the screen pans with her. This means that you don't have time to perfect vine placement or create safe zones in advance. This leads to quite some adjustment before you're able to control Ivy fluidly. By the time the later levels come around though, you'll be prepared for them.

Nearly all of the levels are very linear, and all are quite small. As you progress, the game throws different kinds of enemies and obstacles at you that cause instant death and restart you on the same level. There will be spikes and water droplets on the ceiling so you fling Ivy into the air more carefully, and while one set of enemies can be despatched with vines, another type can't, so you then have to time your approach.  These subtle changes to the levels keep the game fresh as you require different approaches as you progress.

Levels tend to be quite short, getting to the goal is a straightforward endeavour, with the occasional alternate paths that lead you to feathers or directly to the goal. It's collecting the ten feathers in each level that can be risky and require clever movements. Collecting ten gives you an extra life, and marks the levels as completed with all feathers.

The instant action controls and short levels give the gameplay an arcade style. A perfect run is a lot of fun, but one mistake, and it's difficult to correct Ivy's course. If you're too slow and there's danger around, that's the end. Running out of lives only resets the score counter, so you can attempt each level as many times as necessary with no penalty.

Any of the levels can be played in co-op, and the second player can drop in to draw three additional vines on the same screen. Unless you're coordinating very well though, it's difficult with more vines on the screen as only the player who created a vine can remove it.

Fortunately, in the competitive multiplayer levels, vines created by other players do disappear. Since you can still fling another player's Ivy with your vines, it turns the race for the finish into a strategic contest of speed and sabotage.

Ivy isn't a long game. Even if you collect all the feathers on each level, it doesn't take long to work through the main game. However, at the end, modified versions of these are unlocked, with an extra goal adding difficulty. The multiplayer options are a nice extra, but as the controls take some adapting to and the levels are the same, it's not an ideal game to play in this way.

There's just something about the perfect run, where Ivy stays on the vines for the whole level, not even touching the floor, collecting every feather and avoiding all enemies then landing right on top of the goal. This satisfaction gives you a reason to replay levels for a gold medal rating.

Overall, Ivy the Kiwi can be a satisfying experience despite the initially tricky controls. While the main game won't take so long to work through, there are enough reasons to go back and give it a try in one of the other modes.

It looked fun the first I saw it, because it reminded me of Kirby Canvas Curse.  So I guess it doesn't matter what version to buy. Hmm.. 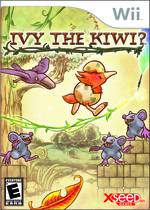