Spiky is still in style.

The main character in this game is not Phoenix Wright; however, Wright still plays a significant role as a supporting character. At the start of the game, rookie lawyer Apollo Justice finds himself defending a jaded, seemingly apathetic Phoenix Wright stripped of his title as legendary defense attorney. Disbarred seven years ago for presenting forged evidence, Phoenix now has a somewhat dubious job as a pianist who cannot play, and, peculiarly, also has a fifteen-year-old daughter named Trucy. Phoenix eventually becomes Apollo's mentor, and his long story slowly reveals itself during the game's four episodes. With its more enigmatic plot, AJ's story presents some interesting twists and does an excellent job of toying with fans' desires to see Phoenix back in action.

In some ways, AJ's text is not as memorable as others in the series. Phoenix's mysterious aura diverts the presentation somewhat from the series' humor-laden roots. That's not to say the game is not well-written or unfunny—there are still some excellent jabs at pop culture and sufficiently odd characters—but the various witnesses aren't quite as interesting as in previous installments. For instance, Detective Ema Skye (who made an appearance as Phoenix's sidekick during PW1's DS-exclusive episode) doesn't share Gumshoe's lovable incompetence. Also, some of the suspects strongly resemble those from earlier games. Fortunately, Apollo's youthful energy, passion, inexperience, and slightly spiky hair make him a worthy successor to the Ace Attorney throne. And while Worthy—er, Edgeworth—remains the most charismatic prosecutor, veteran lawyer and heartthrob rock star Klavier Gavin is cool, witty, and of sound integrity. Other favorites, such as inept prosecutor Winston Payne (highlight to read spoiler) and the bumbling judge, round out the cast.

Gameplay remains mostly unchanged. Investigations still consist of talking to witnesses, presenting evidence, and examining the crime scene. Courtroom debates uphold the traditional theatrics and banter as Apollo cross-examines witnesses to pry out the truth. After PW3's courtroom-heavy action, some may not welcome AJ's return to the frequent, sometimes-annoying crime scene investigations. You can no longer present pictures of characters during investigations, and Apollo cannot see Phoenix's psyche-locks, but investigations can still become frustrating when you're clueless as to how to progress.

There are a few subtle additions, though. Much like Phoenix can detect dishonesty with his magatama during investigations, Apollo has a natural ability to perceive witnesses' discomfort though their body language during testimonies. Apollo's Perceive ability works much like pressing or presenting evidence, and can only be used when doing so is the correct path forward. When activated, time as Apollo perceives it slows down, and he must pan across a zoomed-in view of the slowly talking witness to find and point out their "tell". Characters will only twitch on a specific phrase, so you must identify the nervous twitch as it happens. Of course, you can repeat the statement as many times as you need.

The game also makes use of the DS's touch screen and 3D graphical abilities, although use of both is somewhat subdued. The DS-exclusive chapter in PW1 required players to examine every 3D model of evidence, and leverage multiple forensic tools to solve riddles. AJ spreads similar tasks here and there, but still primarily relies on discussions and presenting evidence. While at first this may seem like lazy game design, this decision actually keeps the touch screen sections from becoming overly gimmicky and allows room for more elaborate touch screen features in inevitable sequels.

Holding with tradition, the final chapter is the most challenging and unique. Taking a cue from Trials & Tribulations, the fourth episode in AJ spans events from two cases and seven years as you play as both Phoenix and Apollo (spoiler). The game does so with an interesting storytelling technique that, while intriguing, clashes somewhat with the series' style by practically breaking the fourth wall (spoiler).

Ace Attorney fans have an almost insatiable appetite, and Apollo Justice: Ace Attorney does an admirable job of quelling their hunger pains. However, since Apollo's adventure builds upon the Phoenix Wright trilogy and the original remains the best, playing the Ace Attorney series in order remains my recommendation.

The soundtrack is average for the series, with more of a classic Capcom vibe, and includes a mixture of new and remixed songs. Klavier's theme is pretty awesome, though.

The menu system continues to work as expected. Manipulating and examining evidence with the touch screen is intuitive, with a few minor exceptions.

The game design may not be terribly new any more, but courtroom debates are still thoroughly enjoyable, and Apollo’s ability to perceive nervous twitches adds variety to cross-examinations. More elaborate use of the DS platform’s features would have been nice.

If you were to replay one of the Ace Attorney games, this would not be the best choice. The text relies more heavily on intrigue than humor to engage the player, making this game far less interesting on a second play-through. Also, at a little over twenty hours long, AJ is notably shorter than the first and third Ace Attorney games for Nintendo DS.

Apollo Justice: Ace Attorney does not surpass the first or third Ace Attorney games, but with its revamped cast of characters and a handful of new and resurrected gameplay mechanics, this entry holds its own. I look forward to Apollo's next case.

Great game, recommended for everyone... =)

I've just finished the first case, and I'm not liking what Phoenix has become.. we'll see how it turns out though. 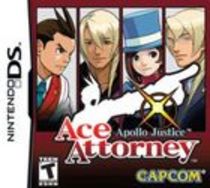