Mario and Sonic take their competition for Olympic gold to the 3DS.

Although the series has been known for it's best-selling Wii iterations, handheld versions of the first two titles (Mario & Sonic at the Olympic Games/Olympic Winter Games) received a rather graceful translation from the main games, at least compared to countless rushed handheld versions of already terrible licensed games. Usually unable to implement the same motion controls as the Wii, the DS (and soon-to-be 3DS) games focus on precise button presses to offer a similar level of challenge with the available technology. The 3DS version of London 2012, however, will offer gyroscope controls to better simulate the Wii experience.

The game itself is set to include 50 original and unique special events, including many not found in the Wii version, as well as 20 characters from among the two franchises. Some of the more interesting events include judo, badminton, and BMX racing. The presentation of these events looks especially sharp, and is much closer to achieving parity with the Wii version. As far as features, the 3DS version is expected to include many of the modes present in its sister version, including multiplayer and Wi-Fi.

Of course, being the handheld version of a licensed game with a shaky critical history, certain caution is expected and in fact encouraged. Predicting whether Mario & Sonic at the London 2012 Olympic Games meets the expectations laid out by the DS titles is a difficult task to undertake, but with games like Resident Evil: Revelations and Kid Icarus: Uprising being released during the same time period, one can only hope that the title can find it's own voice within an ocean of tough competition.

While these games have been fun, I'd really like to see a Mario and Sonic game where they team up against their 2 main enemies of Bowser and Eggman. THAT'S what I'd love to see.

Now THAT is one great idea, Kitt. I do hope they do it one day!

While these games have been fun, I'd really like to see a Mario and Sonic game where they team up against their 2 main enemies of Bowser and Eggman. THAT'S what I'd love to see.

Yes, this is indeed a great idea... an idea Daan, Josh and I discussed weeks ago on Connectivity :p

The first Olympics game was a mixed bag, about half of the events were fun and the other half were boring waggle fests. The best events were the dream events, and I felt the game had a lot of potential, especially in that area. Unfortunately, it still doesn't look like the series is striving towards adding in that extra charm to the events, and is instead just the Olympics with Mario and Sonic characters in place of real athletes. It's disappointing to see the series be little more than a cash grab.

As far as crossovers are concerned, I actually don't think that the Olympic games are a bad premise for a crossover, especially if they created more fantastical events to go with them. The real Olympics feature many countries coming together to compete, so it makes a certain degree of sense to see two universes collide at a videogame equivalent of the Olympics. I, personally, don't think that a Mario and Sonic platformer would work very well, given the vastly different play styles that each series has. 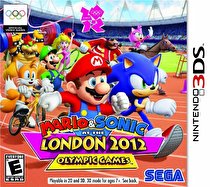