It may not be made of yarn, but this Kirby game is looking mighty epic regardless.

Last year, we were treated to the wonderful Kirby’s Epic Yarn. The visual fidelity made it stand out among a sea of great Wii titles, and the gameplay, although too easy for some, could be easily enjoyed by anyone, irrespective of if they have been with Kirby since day one or are new to the world of the pink puffball. But despite all the praise we gave to Epic Yarn, some of us were left wondering if there would ever be a fully traditional Kirby console game. Our wishes have been granted, as this month we are getting Kirby's Return to Dream Land, a game that is looking to take players back to classic Kirby, while adding new content to make the return more than appreciated.

The development history behind Kirby's Return to Dream Land is very complicated. A Kirby game for the GameCube was originally announced in 2005, and much like other GameCube games around the same time the Wii was released, development was moved up. With Epic Yarn being a reality, players assumed that the Kirby game was no longer a reality. It was then announced in early 2011, originally under the name of Kirby Wii. It is the first traditional Kirby game for console since Kirby 64 in 2000.

Kirby's Return to Dream Land brings a modern update to the classic Kirby style of gameplay. As Kirby, you will complete levels and attack enemies by inhaling them and either launching them back at other enemies or absorbing their distinct powers and using them against foes. As fine as that sounds by itself, there have been some new ideas implemented into this concept. Not only can Kirby suck up his enemies, he can also inhale enemies three times his size and launch them back for a bigger and more effective attack. Of course, Kirby can also float when he inhales air.

In this Wii iteration, Kirby gains some new abilities when he inhales certain enemies. For example, when Kirby eats a water-based enemy, he turns into Water Kirby. He can spit out a water blast and glide through water. Likewise, Leaf Kirby is what he turns into when he inhales a leaf-based enemy. He shoots leaves at enemies and hides in them in order to avoid enemies. His classic power-ups, like Fighter Kirby, Fire Kirby and Sword Kirby, also make appearances in this title.

The story behind the game concerns an alien named Magolor, who has crash-landed on Pop Star, losing the pieces of his ship, the Lor Starcutter, in the process. He requests the help of Kirby and his friends in order to find the pieces scattered throughout the planet and return home

One of the biggest additions to Kirby's Return to Dream Land is a multiplayer mode for up to four players, similar to that of New Super Mario Bros Wii. While the idea of an additional playable character has been in previous Kirby games, this is the first time up to four appear on screen at once. Players get to choose from three of Kirby's former rivals: Meta Knight, King Dedede and Waddle Dee. Each character has his own unique strengths and weaknesses. Dedede has his giant hammer and is the slowest of the characters, while Meta Knight is a master swordsman. The characters can drop in at any time during gameplay.

If Kirby is more appealing to players, they can also select him as a playable character. The other Kirbys will have different colors. Just like Kirby can suck up bigger enemies and spit them out for a far more devastating attack, Kirby can inhale the other characters and use them to perform the same attacks.

The visual fidelity of Kirby's Return to Dream Land may not match the imagination seen in Epic Yarn, but it is no slouch either. The colors pop out and the characters are beautifully designed. The music also retains the whimsical Kirby feel.

Kirby's Return to Dream Land is shaping up to be one of the Wii's biggest platformers of the year. It may not be as groundbreaking or as genuinely inventive as Epic Yarn or Kirby Mass Attack on the DS, but it looks like it could be one of the best Kirby games yet. Kirby returns to Dream Land and to consoles on October 24. 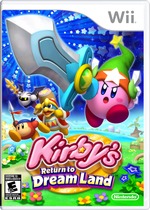