Time to pack your things and move into a new village yet again!

Animal Crossing: Wild World was one of the Nintendo DS’s biggest titles, selling in excess of five million copies in Japan alone. It shouldn’t be too big of a shocker that Nintendo hopes to carry on that success to the 3DS with a new Animal Crossing title.

Not much is known about Nintendo’s new entry into series, but judging by a press release and some screenshots, Nintendo is hoping to take the franchise in a new direction and use the enhanced wireless functionality of the Nintendo 3DS to make the online experience even deeper. In addition to this, Nintendo has also promised new game play and and a new graphical look.

The biggest change to the new game is the ability to become the mayor of their town. With the help of the citizens of the town, players will now be faced with the challenge of making their town a better place to live.

There is still plenty of mystery surrounding Animal Crossing but Nintendo seems to be committed to trying new things with the franchise. No set release date has been announced, but rest assured, Animal Crossing will be a game to look forward to.

You can become the mayor !  ;D


That's actually a pretty big step for the franchise and opens up a ton of things . Looks like a worth while update/sequel to the franchise. Good 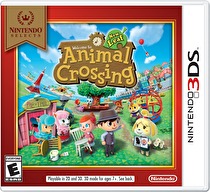