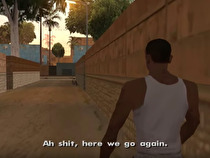 Three foundational open-world games are coming to a Nintendo console for the first time ever later this year.

2K and Rockstar have announced that the early 2000s Grand Theft Auto games - Grand Theft Auto III (2001), Vice City (2003), and San Andreas (2004) will come to Switch "later this year" according to multiple outlets including Game Informer and IGN. The games were rated for Switch in Korea, and have been the subject of rumors for months.

Originally launched on the PlayStation 2 and ported to various Xbox, PlayStation, and mobile platforms as well as PC, the GTA series has not appeared on a Nintendo console since the DS's Grand Theft Auto: Chinatown Wars in 2009.

I like this. I might re-purchase these, even though the soundtracks won't be the same (like when they re-released them digitally on Xbox 360 and some songs were removed because the licenses had expired and they didn't want to renew them).