Happy birthday to the original Diamond and Pearl, by the way. 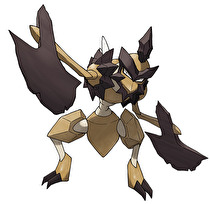 On the 15th anniversary of Pokemon Diamond and Pearl's Japanese release, The Pokemon Company have dropped new trailers for the two Sinnoh-set games releasing in the next few months: Pokemon Legends: Arceus and Brilliant Diamond / Shining Pearl.

Legends Arceus will feature character customization and what appear to be boss battles against "noble Pokemon": the first Noble to be revealed is a Bug/Rock type called Kleavor that appears to be an ancient version of Scyther.

Pokemon Brilliant Diamond and Shining Pearl's trailer confirmed the presence of the Poketch, the smartwatch/multi function device tied to the bottom screen of the DS in the original Diamond and Pearl. A new function for BDSP is that the old Hidden Machine moves can be summoned from it; a follow-up tweet from the official Pokemon account confirmed that "wild Pokemon" use the move for you.