We asked Nintendo a couple of burning questions. 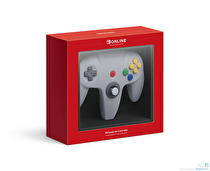 We had a couple of questions for Nintendo regarding details of the Expansion Pack for Nintendo Switch Online, but Nintendo is not forthcoming with details yet.

Following yesterday's Nintendo Direct, we inquired to Nintendo about whether the Sega Genesis games would have online play in the Nintendo Switch Online subscription, as it was specifically mentioned for the N64 games. Nintendo promised "more details closer to launch" but did not get more specific.

Our other inquiry was to whether N64 accessories that clipped into the back of the original Nintendo 64 controller - the Rumble Pak, specifically - would work with the special wireless controller announced yesterday. We received the same response to this inquiry.

For $50, this mofo better have Rumble Pak functionality included. Then again, this is the same Nintendo that’s releasing the 3-button Genesis controller also for $50 despite the SNES controller being $30 which was ridiculous as well (I have four; I’m part of the problem).