One spinoff, one standalone title this time. 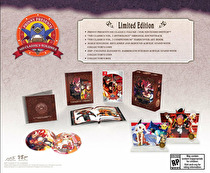 NIS America is bringing back another pair of older RPGs next spring.

The doods have announced Prinny Presents: NIS Classics Volume 2 for a spring 2022 release. The pair of titles included in this pack are:

As is standard NIS America policy, a limited edition is available from their online store for $99.99 US which includes a soundtrack, hardcover artbook, and coin set.