We're not even pretending this is getting anything but an M rating. 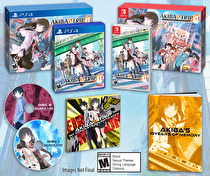 One of the more unique concepts in beat-em-ups is coming to Switch this summer.

Akiba's Trip: Hellbound & Debriefed, a remake of the 2010 Japan-only PSP title developed by Acquire, will be released in western territories this summer via XSEED. The Japanese release is slated for May 20. The Akiba's Trip games involve saving the Akihabara district of Tokyo from a horde of "vampires": although the vampires can walk outside during the day, they are destroyed by excessive exposure to sunlight - obtained by ripping their clothes off.

The XSEED store will sell a limited edition for US$49.99 that includes a two CD soundtrack and artbook, while the digital release will be US$39.99.

Headline updated: the only RPG in the series is 2016's Akiba's Beat