Scott Pilgrim Vs The World Punches Ticket To Switch January 14

We can probably blame 2020 for this delay, though blaming Ubisoft management for not living up to their promises is also acceptable. 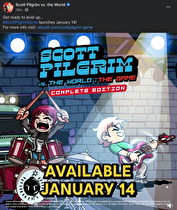 A classic brawler will be returning a little later than anticipated.

Scott Pilgrim vs The World, the licensed brawler originally announced for a 2020 re-release, has now confirmed a January 14 release date. The announcement was made on the official Scott Pilgrim Facebook page.