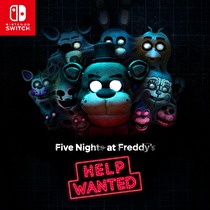 The immensely popular horror franchise has launched Five Nights At Freddy's: Help Wanted on the eShop today. Previously a VR focused experience, Help Wanted retails for US$29.99/€29.99/£24.99 and will feature scenes from the first five FNAF games.

New, original minigames are in the game in addition to the scenes from the previous games, and the Switch version offers HD Rumble support for dockable Switches.