The news editor had to set up an autotext to complete the full title. 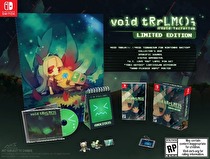 NIS America has made their first of two announcements this week, and it's a Switch localization of a game seemingly impossible to pronounce in any language.

void tRrLM(); //Void Terrarium (Void Terrarium for short) will come to the Switch this summer from NISA. The dungeon crawling gameplay also includes elements of roguelikes and survival games.

A limited physical edition can be purchased from NIS America's online store. Void Terrarium is a spiritual sequel to 2014 PlayStation Vita (later ported to PC) title htoL#NiQ: The Firefly Diary.