The Lite doesn't mean the OG is gone yet. 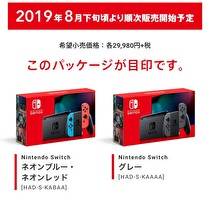 The Switch is getting a stealth upgrade in Japan next month.

Nintendo have announced a revision of the existing Switch hardware for release in Japan on August 29. Retailing for ¥29,800, the revised Switch will feature a minimum battery life of 4.5 hours in handheld mode with a potential maximum of 9 hours.

Although western branches of Nintendo have not made social comments about the revision as of 8:40 a.m. Eastern time, the new model will be available in North America starting "mid-August" and in Europe "early September" at the same MSRP. The new models will have a model number of HAC-001(-01) outside Japan and will have serial numbers beginning with HAK according to Nintendo of America.

Nintendo of America have also announced two new color sets for the Joy-Con controllers: blue/yellow and purple/orange pairs will be available October 4.

I don’t really use the Joy Cons, but damn, that Neon Orange Joy Con is baller.

Improved battery life is nice and all too.

I wonder if the RAM is upgraded like one of the leakers suggested might happen.  Though doubling the RAM seems more than a minor upgrade.  I also wonder if this means they may have fixed the Joycon problems as well?

According to the FCC filing from a few days ago, the revision only has the shrunken 16nm X1 chip (which means better battery life and faster loading from it), a different flash storage chip, and different board to accommodate them. The extra RAM seems to be just for devkit models.

I'm guessing the rumoured Switch Pro is probably not showing up any time soon.  Seems unnecessary to tweak the base Switch model if you're going offer yet another variation.  Would Nintendo realistically have three Switch variations on the market at the same time?

Nintendo is likely updating the base model because it uses the same chipset as the Lite model. It simplifies the supply chain especially if it still plans on releasing a New/Pro model. Nintendo wouldn’t want to putz around with three separate chipsets.

Will the new Joy-Con colors come in both left and right, or are they always right or left?

Would Nintendo realistically have three Switch variations on the market at the same time?

Nintendo have had at least three variations of the 3DS on the market at one time, so they could certainly do it again, especially now that this is their only platform.

The customer wants a more portable system. Should he get the one that fits in his pocket better or the one with better battery life?