But before that, we go even FURTHER beyond. 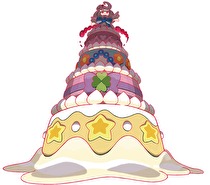 New details have been released for Pokémon Sword and Shield in a trailer released today, which include a returning feature and an increase to a newly announced one.

Chairman Rose and Oleana, the chairman of the Galar Pokémon League and his secretary, will have some role in the game.

In addition to the Dynamax function, some Pokémon are capable of becoming even bigger through the process of Gigantamax. Along with the growth comes a full appearance change: Alcremie starts to resemble a multi-layer cake, while Corviknight's wing armor turn into their own birds and Drednaw becomes bipedal. Special "G-Max" moves will do massive damage and also affect the field.