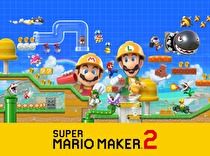 Nintendo has dropped a bunch of new details about Super Mario Maker 2.

A host of new items were included for course creation, including the Angry Sun from Super Mario Bros. 3, snaking blocks and on/off blocks from Super Mario World, and seesaw platforms. Sound effects now have new flourishes, including an appearance by Takamaru (from the Famicom's Mysterious Murasame Castle). Challenges, such as killing every one of a single enemy type in the level, can be added as well, and creation can be done in co-op with Joy-Cons.

New themes include deserts, snow, forest, sky, and a selectable night theme that can alter all of the courses.

The ingame story mode sees Mario attempting to rebuild Peach's castle by getting coins in over 100 Nintendo-created levels. Characters will be found in the world who award coins and give missions back at the castle.

Levels can be played with up to four players, represented by Mario, Luigi, a blue Toad, and Toadette. The mode can be done both online, or in a local environment provided one player has an internet connection as the courses are pulled from online.

The "100 Mario" and "10 Mario" mode have been replaced by an Endless Challenge, which has online leaderboards.

Nintendo Switch Online will be required to upload courses. In North America, a bundle of the game and a year of Switch Online is available for US$69.99.

I'm honestly, genuinely surprised at online multiplayer. I figured the best I could hope for was local multiplayer... though ironically, it appears that there is actually no single-system local, which is a bummer.

Either way, this game just solidified itself as my future most-played Switch game, and probably most-played game of all time.

Looks very cool but I don't see in the recap any mention of Nintendo not permanently banning your levels without stating a reason so... no purchase from me until the game has been released and players have confirmed that the banning process isn't so nuts.

I understand that levels take up storage space so there is some logic in culling the less popular levels.  But if the level doesn't have an exploit you should be able to upload again.  90% of the userbase will get bored of the game in a few months and if their levels get taken off the server they'll probably never even know so the storage space issue will sort itself out.  And there can be simple pre-made statuses like "not popular enough", "offensive content", "exploit" and then the user knows what's wrong with their level and what they need to do to fix it.

Man, online 4 player is going to be a troll griefing extravaganza!

The new features all look great!