Runbow, Pirate Pop Plus Sprinting To Switch In April

With an option for a card. 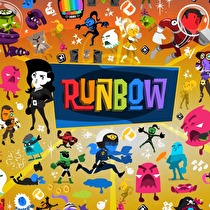 April will see a pair of titles from 13AM Games hit the Switch.

Switch versions of Runbow and Pirate Pop Plus will be released on Switch in April. Runbow specifically has been tabbed for an April 24 release.

A physical version of Runbow for Switch will follow on June 14, with all of the game's DLC and physical goods to be announced.

Runbow is so perfect on the Switch. That's a day-one download for sure.