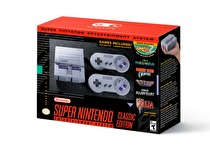 There will be Classic systems from Nintendo into 2018.

A press statement just released by Nintendo of America has confirmed that the Super Nintendo Classic Mini system will continue production into 2018, after originally planning to cut off at the end of this year. NoA is also promising to ship more units on launch day (September 29) than were shipped for the NES Classic Mini in all of 2016 and to keep the unit in high supply while shipments are available.

The NES Classic Mini will also have a new printing next summer. More specific timing on the re-release will be announced later.

Im guessing they will never say, but I would be very interested to know how many of the NES Mini were made

Glad to hear Nintendo seems to be figuring out the manufacturing capacity does exist for plastic shells and off-the-shelf mobile chips to satisfy consumer demand for their products.  Well, better satisfy I should say, don't want to get ahead of myself.

Im guessing they will never say, but I would be very interested to know how many of the NES Mini were made

According to Reggie it sold 2.3 million worldwide so I'd say 2.4-2.5 million produced to account for defective, damaged, or lost units.

Oh, I must have missed that news. 2.3 million is more than I was expecting.

The NES Classic is coming back as well? Okay, now I believe this.

I was skeptical because this shouldn't have been a problem in the first place. While I still think Nintendo deserves criticism for how things were handled thus far, I'm elated it arrived at the only logical conclusion: make more of these things. I'll still try to get an SNES Classic on launch day, but I feel a little better if I leave empty handed.

The NES Classic reprint is very exciting news.  I wonder if they'll reprint the controllers as well.

Reprinting the NES Classic makes me now trust that maybe Nintendo will figure this out.  At the very least I may have a second chance at a SNES Classic if they're clearly willing to reprint these things.  Though I wonder if the NES Classic reprint will have the exact same games due to the third party titles.

Clearly Nintendo realizes they left tons of money on the table the first time around and wants to fix it.  The second Reggie acknowledged scalpers it raised alarm bells that Nintendo may be a little more hip to what's going on here than they usually appear.

Sounds good, but I'm still in the "believe it when I see it" camp after being let down by Nintendo before.

The NES Classic reprint is very exciting news.  I wonder if they'll reprint the controllers as well.

But then I still wouldn't get one. :(

Maybe the main difference with Original NES Classic and NES Classic 2 is the cords will be longer. Maybe a game lineup change?

I would want the games to stay the same, just to not complicate things

I was just talking with a friend last night about this and predicted they would re-release them down the road. Seems like they will become "seasonal" mainstays or some such deal. Perhaps they will cycle through each one, SNES this year into next Spring/Summer, and the NES for Next Summer into 2019. They could follow it up with an N64 mini and have all of them on a 3-year cycle. This would allow them to balance production, maintain a form of demand, and suppress the scalping market.


If I see it on shelves, digital or physical, then I'll snag it, but I don't plan to be waiting in ridiculous lines.

The controllers have to be plugged in. There is no Wii Remote support.

Aren't the wireless 3rd party controllers that can be used with these systems via bluetooth dongles?

The controllers have to be plugged in. There is no Wii Remote support.

Bummer, I always though because they had same sort of plug that you could use them like classic controller via wiimote.

Maybe the main difference with Original NES Classic and NES Classic 2 is the cords will be longer. Maybe a game lineup change?

If they change any of the games on the NES Classic reprint then they're not really re-releasing the NES Classic.  It's like a new product then and anyone that specifically wanted an NES Classic but couldn't get it still can't.  I can see due to the third party games that maybe something will change because I assume the short lifespan was due to the timeframe of the deal Nintendo made with the third parties.  They may have to re-negotiate and that may result in someone pulling out and needing their games replaced.  But I don't think Nintendo should intentionally change the lineup.  Plus if they do that then there will be collectors that want BOTH variations of the NES Classic and those of us that missed out will have to compete with them to get one.  If they can re-release the same thing again then the existing owners will have no desire to get one.

I figure what Nintendo really wants to do is what everyone was hoping the NES Classic was going to be - an impulse buy during the Christmas season for lapsed gamers.  I doubt that even one system was sold in such circumstances.  Nintendo is probably looking for a do-over - how things had gone with the NES Classic if they had an accurate assessment of how popular it would be.

Would be interesting if they released a "premium" Mini that allowed you get download additional titles, make it their VC solution in an "authentic" shell.

Since I'm getting an SNES Classic then I may grab an NES Classic if I see one on a shelf, they would go nicely together. I wonder if the price will be the same, though I wouldn't mind it being $10 more if they include a second controller.