All the #GreatestTankBattles, but without Auston Matthews waiting at the end. 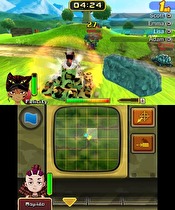 Your big game for the week in both North America and the PAL regions is Tank Troopers. The six-player local multiplayer (I find your lack of online disturbing...) tank combat game featured the Codename STEAM semi-memorial sing-along trailers, but will probably outsell Intelligent System's title when it's all said and done.

North America is picking up the stragglers this week, as Back to Bed is the highlight on the Wii U eShop. But the biggest deal for those hanging onto the console for dear life is of course... cue the trumpets... OGRE BATTLE 64! Yes, SquareEnix returns to the eShop after a year's hiatus by acceding to James Jones's demands and giving us the rarest of creatures: A N64 RPG that doesn't turn people off the genre immediately. SquareEnix is also throwing a sale on their Final Fantasy-related content because apparently there's an anniversary this year.

Europe has a light week, but they're probably still playing Ogre Battle anyway. If you prefer your RPGs to have action, stupid dancing and power levels just shy of ten thousand, Dragon Ball Fusions launches Friday.

The Legend of Zelda Breath of the Wild: A Wide World, A New Adventure

Monster Hunter Generations is 33% off until 2 March.

ZeNfA Productions titles are on sale until 2 March.

PixelMaker is 20% off until 23 February.

Big John Games titles are on sale until 9 March.

EnjoyUp Games titles are on sale until 16 March.

Joindots titles are on sale until 2 March.

CIRCLE Ent. titles are on sale until 9 March.

I need more Ogre Battle in my life.

Please release March of the Black Queen on 3DS Virtual Console. Thank you.