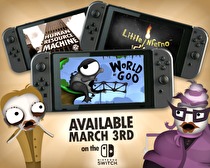 World of Goo was an early standout title for WiiWare in 2008, while Little Inferno was also a Wii U launch game. Human Resource Machine was a 2015 Wii U release.

World of Goo is a game I've been wanting to try and Human Resource Machine sounds very interesting to me (I believe James Jones discussed it on an episode of RFN), but I'm sorry Little Inferno doesn't appeal to me AT ALL. If it was free I wouldn't download it.


Hopefully Snipper Clips comes out close to launch too. Maybe my launch day will be several games instead of the 1 or 2 I was thinking.


Does anyone know if my eShop credit will carry to the switch like it does between 3DS and Wii U?

Little Inferno was a fun little game.  I found it very relaxing to play.  Never beat it though.

I will be picking up Human Resource Machine.