You got your Snap in my Pokémon RPG! 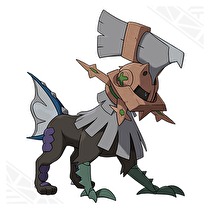 The newest Pokémon Sun and Moon trailer has added some new Pokémon as well as a couple of the game's key sidequests.

Among the debuting Pokémon are:

Some of the version differences have been announced, with Sun and Moon taking place 12 hours apart. This also changes some of the Totem Pokémon: Sun will have Gumshoos as a Totem, while Moon will use Alola Raticate in the role instead. Different Ghost Pokémon were also shown as version exclusives: Misdreavus in Moon, Drifloon in Sun.

The side objectives for the game include attempting to rebuild Zygarde in a Zygarde cube, collecting cells and cores throughout Alola. Another key item is the Poké Finder, which allows budding shutterbugs to take pictures of Pokémon and upload them to the internet for ratings and specific comments.

Another Team Skull member was revealed as the group's enforcer Gladion, while the Aether Foundation - a group of Pokémon preservationists who live on their own artificial island - were also revealed. The trailer ends on the reveal of "Ultra Beasts", with the first being named "UB-01" and resembling an alien, but no further details were given.

This time shifting is interesting. Are the current games influenced by the system clock? I play games mostly at night on weekdays and mostly in the morning or afternoon on weekends. I don't remember any consistently corresponding effects in X or AS. I was planning on buying Moon, but since I will likely play it most frequently at night, a 12 hour forward shift will push my system time into morning play. That initially seems counterintuitive, you'd think if it were tied to daylight, you'd want to play Sun during the day. But I can't imagine that's what they are going for since I assume gaming habits are tied to age and family status more than anything else. Why push certain age groups towards Sun or Moon unless the content will vary substantially?

I wonder there just isn't a day/night cycle and the versions themselves all take place at either day time or night time.

Also, these "Ultra Beasts" seem very interesting.  I'm really curious as to what those are exactly.

Pokemon for awhile has been doing real time day/night system and having pokemon change during the day and night system.  (I assume it is real time it might not be.)  This is a really smart way to help people choose which version to buy...because people may want to buy the version that gives them a better day/night system for play.

Type:Null looks like it should be a Zelda enemy

I noticed the twighlight on Alpha Sapphire tonight. It's so strange, I can't believe I just happened to be playing during the day when I crossed all those sunny coastal routes in X.

The 12 hour shift makes sense to me if Moon is set to the system clock. I thought it was the other way around at first.

I guess this is the problem with playing games designed for children, but I'm still having a hard time understanding who the 12 hour shift is catering to. If you play at night, it seems you get the worst of both worlds. So I assume it's aimed at kids who want to play Moon during the day. I don't have kids of my own, but I assume that they do most of their gaming outside of school hours, so who is this benefiting? The younger the child, the less likely they are to appreciate the night/day cycle. The older the child, the more likely it seems they would be gaming more in the evenings. I feel like I'm missing something obvious, because I haven't seen people raising this point. If anything, people are saying it helps nighttime gamers.

Maybe the day/night cycle doesn't kick in until the end game, like the seasons in BW.

Or perhaps it's suspended during game events.  From what they're saying in the trailer; Gumshoos being a totem is Sun and Raticate being a totem in Moon; you could infer that no matter what time you're playing Moon, that event happens during in-game night time.

Again, I just hope the game is hard or has a difficulty setting.

Yeah, the games have been a bit too easy.  I often get caught up on how fun it is to explore a new region with new Pokemon, but there really wasn't any challenge in X&Y.

Thinking about it makes me kinda wanna go back and play HGSS with its challenging pacing issues.