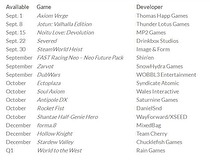 The summer might be ending, but indie developers will keep the summer jams flowing on Nintendo consoles.

Nintendo announced the "#Nindies Summer Jam" today, with a major eShop game releasing every week on either Wii U or 3DS. The developers will also show behind-the-scenes video and show their favorite games available on Nintendo systems, and their games will be offered for 10% off during the launch week.