It's been three (thousand) years... 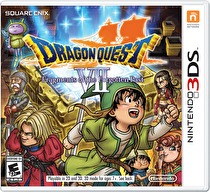 The long wait has about three months to go for Dragon Quest VII.

The remake of the 2001 PS1 title for 3DS will release in North America on September 16 according to updated information submitted by Nintendo following the game's E3 stream.

A long demanded remake, SquareEnix credited fan demand and petitions for the game's localization, including all of the game's party chat.

I still hope they have the Dragon Quest VIII remake for the end of the year, but probably not anymore.

SquareEnix credited fan demand and petitions for the game's localization

Thank you for listening to the fans! Now I wait for the EU date.

I was hoping I would get it a little sooner.  Though I still have games I got for Christmas I haven't even opened yet so it isn't like I don't have other stuff to play before then.

I'm playing Dragon Quest IV right now and, while it's a solid game, boy is it making me appreciate a lot of the advancements in VII they showed during the Treehouse gameplay. Even beyond the huge step up in visuals (which is to be expected when you're going from a DS remake of an SNES game to a 3DS remake of a PS1 game), having a robust job system is a game-changer for games that are this dependent on grinding.

Wow, this is quite a bit later than I had expected.  Still excited and don't mind waiting... but agree with Triforce Hero that it makes getting both games in (calendar) 2016 seem very unlikely.

It'd also be sensible to put VIII in 2017 because VII is longer than a particular cat.