Almost, but not quite, giving it away. 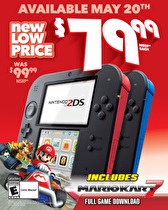 The Nintendo 2DS is receiving another price drop in the US.

Nintendo announced today that the non-clamshell 3DS player will drop to $79.99 effective next Friday (May 20) from $99.99, including versions with Mario Kart 7 preinstalled.

If I didn't already have a 3DS I would be all over this.  I don't use the 3D that often anyway.  $80 and it comes with a game?  If you don't have a 3DS yet and have at least one game (that isn't a New 3DS exclusive of course) that catches your interest why not bite?

Regardless of what you think of the 2DS, this is a pretty good deal!