The ability to destroy a planet in a single blow proves insignificant next to the power of a massive loss. 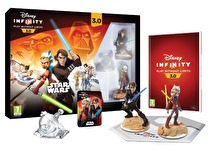 The temporary hiatus for Disney Infinity appears to be permanent.

During a financial call today, Disney announced that they were taking a US$147m charge related to "the discontinuation of our self-published console games business, principally Infinity". The last game in the line, Infinity 3.0, released last September and the company announced intentions to focus on new figures earlier this year rather than a Infinity 4.0.

A promised Rogue One playset has been cancelled, and the final figures to release will be themed around Finding Dory and release next month. Avalanche Studios, who helped with the development of Infinity 3.0, has also been closed putting 200 people out of work.

Only a few years after they killed off Black Rock Studios (who made the really promising Split/Second) and went in this direction instead.

Wow - I never got into this game, but this seems like huge news. Disney Infinity was a massive property and it seemed like the game was progressing really well with steady improvement and constant updates with each new play set.


Is this a sign that toy-based gaming is dying off?

What!?! But this was a very big, very lucrative series. Or so I thought. Sounds like they didn't handle it as well as I previously thought. Guess I better grab the few Marvel/Star Wars figures I really wanted this summer.

Is this a sign that toy-based gaming is dying off?

Well, LEGO's series didn't seem to be moving units and between the pandemonium of amiibo's hot-then-cold and the existence of 4 toys-to-life series one was bound to fall. I just expected it to be the series without super brand poser (Skylanders) or the new comer (LEGO).


I hate that Disney is getting out of publishing. I don't like EA controlling virtually all of Star Wars game development.

I just assumed that this, Skylanders and Amiibo were all selling like hotcakes because I saw these Toys-to-Life things dominating store shelf space.  Did Nintendo's recent Amiibo success eat into this?  Was Disney Infinity ever that successful in the first place?  I'm not very familiar with it and only really paid some attention to Amiibo because of Nintendo.

Or, dare I hope, is this fad OVER and Nintendo can stop putting their DLC on physical toys that they under-produce?  Not that I would expect Nintendo to pick up on a fad being over until it put a huge dent in their own sales.

And I give a thumbs up to the Split/Second shout-out.  That game is awesome and creative and it is a damn shame that Disney just killed it off after only one game!

My daughter and I both enjoy Disney Infinity a lot. The figures make great collectibles, too. This is really sad news. But on the positive side, our shelves are bursting with these figures and I don't know where we'd put more of them. And hopefully I'll be able to get the ones I missed at a decent clearance price in the near future.

Whoa! Brandon Jones will be devastated. Jonny V will be out of a job!

By the numbers, Disney Infinity was the highest grossing of the toys-to-life genre, but they overspent on development to hit the high expectations that comes with their brand. They did say they're transitioning to a licensing model, which could mean another company might take it on in some way, though I highly doubt it.

Well, that's one game Wii U game not releasing in June...

This opens up a lot of room in the toyshop. i can see a collaboration with Nintendo in the future where Disney characters are released as Amiibo for certain games. smaller scale stuff, like with the Kirby games.

Good Riddance, what I saw and played of Infinity was rubbish. Now just put Lucasarts back the way it was and give us back Monkey Island.

That said, looks like I'll have to buy Jasmine while I still have the chance.

Lucas Arts is dead. It died before it was closed, that was just the burial.

Good Riddance, what I saw and played of Infinity was rubbish. ...

What had you seen/played?  Was it the early releases?
I agree that, starting out, the game seemed pretty bad. But with each iteration they really appeared to make improvements - I hadn't bought in yet, but was (finally) on the fence and moving in that direction.

This is quite surprising news.  I always thought Disney Infinity was doing well.  It was certainly a better idea for a game than anything Nintendo has done so far with amiibo, even though I'd rather get precious Nintendo figurines.  It makes me wonder where the toys-to-life market is going.  Amiibo hype has been slowing down ever since the Smash line pretty much ended, so maybe Nintendo will follow suit.  Then again, this may just be Disney being wishy-washy about making games.

Disney's been notoriously skittish about games development ever since Split/Second (which was fantastic but Disney released against 2 OTHER arcade racing games in the same month) and Epic Mickey 2 (which was not fantastic) underperformed, so I wouldn't be surprised if they weren't seeing huge profits (just "modest" ones) in Infinity toys anymore and panicked.

I'm not a fan of the whole "Toys to Life" thing and the Infinity games never appealed to me, but it's always sad to see Disney hang a studio out to dry for making the thing they were told to make. From all accounts, Infinity 3.0 was supposed to be quite good, so it's not the studio's fault they're going down...just like Blackrock how got hosed.