Vs Excitebike Releasing This Week In North America

Though we don't know where it's going. UPDATED: More details 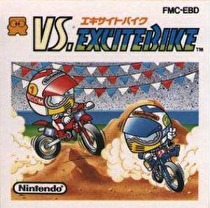 UPDATE: Nintendo has confirmed to us that the game is the Famicom Disc System version, including the track editor, additional tracks/music and 2 player multiplayer. The release will happen once the challenges in "Builders Week" are completed, the first of which is to tip in Maro vs Donkey Kong: Tipping Stars. Original story follows.

Nintendo appears to be releasing an old Famicom Disk System title this week, but have not indicated which platform will get it.

It’s Builders Week! Complete challenges and play great eShop games – all leading up to the release of VS. Excitebike! pic.twitter.com/plQrMdLow4

Vs Excitebike released on the Famicom Disk System in Japan in 1988 and features new music, saving of custom tracks and a 2 player mode with adjustable lap options.

While the FDS Vs. Excitebike *is* the better title, I was hoping this would be the arcade Vs. Excitebike, leading towards a launch of additional Vs. Arcade titles.

Huh, I'm not sure if I knew this existed. Could be interesting.