We have confirmation of the rumored old school Amiibo package. 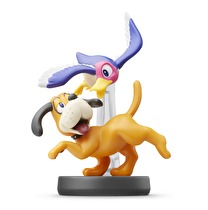 @Amiibonews on Twitter has confirmed that GameStop will be offering a 3-pack Amiibo bundle featuring Duck Hunt, Mr. Game & Watch, and R.O.B. figures. This bundle will be available in limited quantities for a $5-down minimum instead of the Web-in-Store process used for Wave 4. Doors will open early at 9:00 AM on Saturday, August 8th for pre-orders.

The rumor originated on Reddit , stating that early entry would only be available for PowerUp Rewards Pro members, but @amiibonews now claims that early entry will be open to all. The 3-pack is rumored to be a GameStop exclusive with each character available as an individual figure at other retailers. Each store will supposedly have its own allocation of about 30. Any preorders taken over this limit will not be filled. There is nothing to indicate any other Amiibo figures being available for pre-order on Saturday.

Preorders? Have the amiibo-calypse taught them nothing? Or is the fever finally breaking?

My GameStop couldn't really tell me anything. They just confirmed with a wink and a nod that they'll be holding "an event" this Saturday, but they couldn't say yet for what.

I'll be there several hours early!

My GameStop couldn't really tell me anything. They just confirmed with a wink and a nod that they'll be holding "an event" this Saturday, but they couldn't say yet for what.

I'll be there several hours early!

Usually Gamestop sends an email out on the Thursday before these types of events to power-up pro members, maybe they'll do it again in this case.

Now bundled together for the convenience of scalpers everywhere!

The craziest thing about scalping to me has been 1) how the internet has been setting it up as a viable industry (stubhub, eBay, etc) and 2) how much price inelasticity there seems to be on certain things.

Like, are people paying $50 for amiibo because that's just what they're willing to pay? Or because they have to?

I mean, nobody would pay over $20 for an amiibo that's just been sitting on a shelf at Target, right?  Maybe some people would.

Also, what's the point in the bundle?  Is it just to save time when the flood of pre-orders come in?

There's no way they would need to be motivated to drive additional foot-traffic to the stores.

Bundles and store exclusives are going to be the norm with these niche characters. No one is going to want that many R.O.B.s, even though the secondary market would make sure these get swiped from store shelves super quickly.