For a limited time, North Americans will have to buy the game bundle if they want the new SMB Mario. 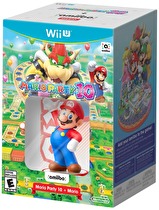 Over on Amazon, a listing for the upcoming Wii U party game confirmed the news. “For a limited time, the only way to play with the Mario Party Mario amiibo included!” the description for the bundle reads.

It does say "for a limited time," so Nintendo will likely release Mario as a standalone figure later on this year.

Mario Party 10 is set to launch on March 20, exclusively for Wii U. Will you be picking up the Amiibo game bundle to ensure you get that Mario figure?

Will you be picking up the Amiibo game bundle to ensure you get that Mario figure?

Nope. I'm Amiibo free and plan to stay that way. I will get the Mario Party 10 game without the Amiibo and thus I will not have to worry about limited supply.

I will get Mario Party 10 for sure and just to spite Khush I will buy a Mario Amiibo and name it after him so he has no choice but to be associated with it.

Honestly, Who really cares about a worse Mario figure than whats common available?

I got DK and Kirby who arrived today. Kirby is actually named after a certain forum member here... care to guess who..?

Obviously it's me. Who else on this forum would anyone ever name anything after?

Naturally of course given that it's probably the rarest one I have my eyes on when I get it I'm going to name it after a certain moderator on this forum...

Again, you're talking about me but it's pretty easy to guess that as every Amiibo you and anyone else owns would be named after me unless someone is trying to be "imaginative" by calling it something like "Mr.NintendoPlasticToyCashGrab the 3rd" or other lame "personable" nicknames.

I will get Mario Party 10 for sure and just to spite Khush I will buy a Mario Amiibo and name it after him so he has no choice but to be associated with it.

Oh no. Stop. How could you I can't bear it that's terrible I'd never ask for that or want that why would you do that to me please stop oh cruel fate I guess I've been shown up yes sir I guess I'll just have to somehow cope living in a world with Amiibo named after me why oh why must life be so hard I've never asked for this except for all those times I have oh curses curses foiled again I am truly suffering from life's slings and arrows woe is me....

It's like they're trying to make sure I don't buy Mario Party 10. (However, that mission completed when it was announced.)