If you've been waiting for more Monster Hunter, you're in for a treat! 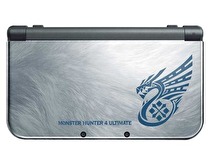 Monster Hunter 4 Ultimate not only has a release date, but also a limited edition New Nintendo 3DS XL model.

The game is due for release in North America and Europe on Febuary 13 along with the new Monster Hunter 4 New 3DS XL model. This model, which comes pre-installed with the game, will be exclusive to Gamestop retail chains in North America while a wider distribution will be seen in Europe. The bundle is set to be priced at $229.99 USD.

Gamers will also be able to try the game out before the release, as a demo is scheduled to be released on the eShop soon.

If you want to know its about $264 if you order online once everything is said and done.

I got my bundle locked and loaded! Only turned out to be 260 and change for me. Looks like GS calculates tax by region. Pity they didn't do shipping like the did for Majora. That was free.

I really wanted to the Zelda version though but those were gone almost instantly. Honestly I actually wish it was just the system and not the game. I like Monster Hunter but  sure I want to play it at the moment and the system is more important. Oh well.

At least I can offset most of that with something I was doing anyway, and EB Games let me do a traditional in-store preorder. So yay?

My brother got this version preordered, since he Fire Emblem se 3DS met with an unfortunate accident. Now I hope we can get the data transfered.