3DS Can Be Used as a Wii U Smash Bros. Controller

You can also connect your 3DS to the Wii U to exchange custom fighters. 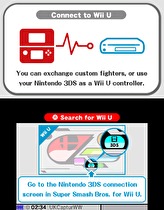 Additionally, connecting the 3DS to the Wii U is a way to share custom fighters between the two systems, likely giving you the option to bring your customized roster with you when playing the Wii U version with friends.

Amiibo figures can also be used with Super Smash Bros. on 3DS, though it's unknown if they will be used in the same way as the Wii U version.

This does not shock me because I predicted this the MOMENT Sakurai said he wanted to develop 2 versions of SUper Smash Bros. in interviews that came out after Kid Icarus came out.