Is Nintendo testing the water for more to come? 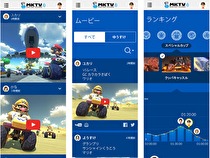 At today’s Nintendo Investor Meeting, President Satoru Iwata revealed that a new web service for Mario Kart, tentatively titled Mario Kart TV, will be available some time around the release of Mario Kart 8.

This service will be accessible on all smart devices and computers, allowing users to see rankings and share highlight reels, as well as receive reels and hint videos from Nintendo. While an NNID is not required for all these features, logging in will allow players to easily find their own rankings, videos from friends, or tournament videos from those they've raced in. They have even potentially hinted at more developments like this one in the near future: "We will work on providing this type of service so that players can enjoy video games more and be in contact with them even when they are not in front of a video game system."

Nintendo addressed rumors of a move to smart devices at their third quarter financial results meeting in January, emphasizing that they were not planning to create games for the devices; however, it was stressed that the company wanted to build up a mobile presence.

Would you like to see more things like this for any other upcoming Nintendo releases? Let us know in the comments!

I really wish Nintendo would just make dedicated apps for this and Miiverse instead of stopping halfway and just making them web-apps.

enough with the complaining! this is a brilliant move. i'm sure they're going to do this for Smash Bros also.

"Web Service" is not the right word here.  Maybe "Web Services".  I came in excited that I might be able to make a site that really leverages the Mario Kart Statistics and the like.

Dedicated apps would be nicer, but I'm willing to settle for this while Nintendo works out some of the kinks.  I think the reason they don't do apps is because you'd have to support 3 OSes while regularly pushing through updates, and it might give people the wrong impression (i.e., the Mario Kart app is a game or Nintendo is making games for smartphones).

Nintendo should get into the mobile app aspect with games and apps. There's a lot the could do with that market. But this sounds (not only) like a good idea but also a step in the direction of making mobile game apps. Guess we'll just have to wait and see how this develops.

I can only think of a few games that I would like on a phone or tablet that are made by Nintendo, most already have a PC alternative anyways. I would be up for them releasing a shit ton of games on Steam though.