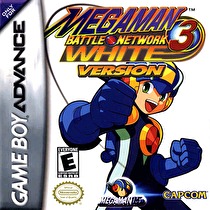 Mega Man Battle Network 3 Blue and White have been confirmed for release on the Wii U Virtual Console.

Capcom issued a statement to IGN revealing plans for these, and other unspecified Game Boy Advance games, to come to the Wii U. This news comes days after ratings by the Australian Classification Board raised suspicions about a potential release for the games.

"We are working on bringing this and other GBA titles to the North American Virtual Console," a Capcom spokesperson said. "We'll have more information about the lineup in the coming months. For Australia and Europe, we are still in discussions about the release of Virtual Console titles for those markets."

Last week’s release of Super Mario Advance 3: Yoshi’s Island capped the first month of availability for Game Boy Advance games on Wii U Virtual Console, and no further GBA titles had been officially announced for the service until now. Thus far only first-party content has been available, so it’s a good sign for the future that at least one third-party publisher is now pledging support.

F-Zero GP Legend and Castlevania: Aria of Sorrow were also both rated by the ACB in March, though as of yet those titles have not been confirmed for release.

at least they chose the most well regarded one, although unless they have some way of trading chips between versions, I'd purchase Blue version because of it's exclusive Giga chip, FldrBack, which is probably one of the best chips in the entire series. I mean, you can't trade giga chips, but FldrBack is so stupid and breaks the fundamental risk with spamming chips or loading them to get a bigger custom screen.

Yeah, FldrBack was pretty game breaking.  I remember playing White version after and quitting at some point.

Personally, my favorite game was 5 because Capcom put out a DS version containing both of the GBA versions.

I don't bite on many VC games I already own, but if I did I guess I would probably go with Blue like I first did so many years ago. Although I do seem to remember Blue having the best exclusives overall, I'll be the first in this thread to give honourable mention to something exclusive to White. I remember coming up with a key strategy for collecting boss chips using the Balance chip available only through White's multiplayer (of course that will probably be stripped out anyway :P).