The new game features more than 200 songs and 60 characters, encompassing nearly every inch of the Final Fantasy series. 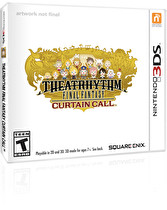 Theatrhythm Final Fantasy Curtain Call is slated to come out in North America and Europe later this year.

The sequel to the 2012 3DS release came out this week in Japan and features a brand new versus mode in addition to 200 songs, a big increase over the original's 70+ track list. Games such as Final Fantasy Tactics and Final Fantasy XIV: A Realm Reborn will be represented for the first time. Curtain Call also adds more characters, including Barret from Final Fantasy VII and Benjamin from Final Fantasy Mystic Quest.

Square Enix won't give Curtain Call more than a "2014" release, though a summer release like the original is likely.

Check out our hands-on preview from Tokyo Game Show 2013 for more details.

great for all those Final fantasy fans. i hope they'll make a game like this about Castlevania.

This is what I wanted to get localized the most.
And I think this game is great for rhythm game fans, and not just those who like Final Fantasy, though that's a plus. Good music is good music.

Anyone know if it's 200 new songs, or all the songs from the original, plus new ones?

Where did you hear this? I did a quick search and didn't find anything.

To say I've been following development of this game for a while would be an understatement.

Oh, and there's DLC for the new one as well. Including Crazy Chocobo from 13-2, because Square hates humanity.

Can you provide some links to confirm?

Thanks mate. I noticed that it doesn't list the event music though, did those get cut, or repurposed?