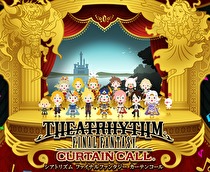 Theatrhythm Final Fantasy: Curtain Call contains over 60 characters from various Final Fantasy games and over 200 songs from the mainline titles as well as DLC from Romancing SaGa and Romancing SaGa 3. The title is set to come out in Japan on April 24 at physical retail stores for 5,800 yen, in a special 3DS XL bundle for 23,000 yen, and on the 3DS eShop for 4,444 yen. Square Enix has yet to reveal a release date outside of Japan.

To read more about the game, check out our impressions from the Tokyo Game Show here.

Where's the love for FF1-8? Is this sequel more focused on the later/lesser games in the series?

IX and X being some of the lesser games? Heh.

there's also no additional FF11 representatives beyond Shantotto and Prishe, and I have a soft spot for that game? I dunno, FF11 once upon a time did really capture the sort of intensity that a dungeon crawl in the original NES Final Fantasy or FF3 for the Famicom did where the game was downright masochistic.

it used to be an acquired taste.  now the game is so watered down that there's really no more joy in hitting milestones you used to feel the results for years. :/ I'm getting off topic, though.

I think titles old and new deserve representation, and even if I'm not the biggest fan of some of the characters on display here, I can accept that some people are, or at least that Squeenix thinks there are fans of them.