Yes, there really were Wii games with DLC. 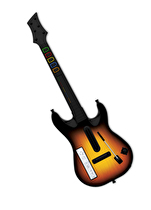 All downloadable content for the Guitar Hero, Band Hero, and DJ Hero games are being removed March 31 from their in-game stores.

Songs previously downloaded will still be available, and servers for the games will remain online. Many songs are going on sale, up to 50 percent off, now until their removal. To take advantage of the sale, Nintendo Points are needed. Nintendo eShop currency does not apply to the Wii Shop Channel.

There have been many games under the "Hero" brand on the Wii including Guitar Hero 5, Band Hero, Guitar Hero: Van Halen, Guitar Hero: Aerosmith, and DJ Hero 2 among numerous others.

Now that I have Rocksmith, Guitar Hero seems quite lame so I won't feel I'm missing out.  I doubt I could get my friends to play this with me anymore.  The fad is long over.

I have a small balance in the Wii Shop and that will probably become useless at some point so I better grab a VC game or something with it.

Like any fad, I think people are going to really want to play these games again in the future. Shame the DLC is disappearing - and I'm loath to buy any because I don't trust at all that it'll be accessible in the future, so having it tied to a console makes me scared any failure will me permanent loss.


Still, I'm tempted to check out the DJ Hero tracks anyway. That game was pretty cool, and the soundtrack was really well done in my opinion.

Huh, I wasn't expecting this. Isn't the DLC hosted on the Wii Shop Channel? I wouldn't think they'd need to discontinue it... I wonder if there's something else going on here. Maybe the licence to the songs expired and they don't want to pay to renew it?

... Maybe the licence to the songs expired and they don't want to pay to renew it?

(This was my guess. And I couldn't really blame them if that is the case - doesn't seem like the licensing would be worthwhile at this point.)

This is affecting the other systems as well so copyright seems plausible.