Download The Legend of Zelda: A Link to the Past in this weeks Nintendo Downloads. 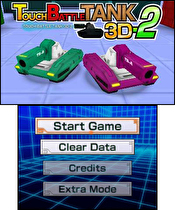 Super Indie Sale – 60 percent off the following titles until 9 a.m. PT on February 13:

Tired of playing Solitare on that unwieldy desktop, or maybe your laptop is just too big to carry around? Well, now's your chance to own what you already have on every other device on your 3DS.

The sequel to the first Touch Battle Tank 3D is finally available on the eShop. If you're like me and have never heard of the series, it's a top-down shooter where you control a tank through 90 stages of the "futuristic tank shooting war."

The brothers first adventure is finally availibe on the 3DS. Before they were gallant plumbers saving damsels from giant turtles, they were plumbers who fought small, aquatic animals.

You can finally play A Link to the Past on the Wii U GamePad. No longer do you have to suffer through the Wii U's less than perfect backwards compatibility. If you enjoyed The Legend of Zelda: A Link Between Worlds, it's the perfect time to give its predecessor a chance.

Note that to see the discount on the indy sale you have to have bought one of the games previously.

I got Bit Trip Runner. I should have gotten it sooner.

Nice sale!  I picked up Runner, Toki Tori 2 and Gianna Sisters.  I hate that the Gianna Sisters game doesn't play audio when playing it on the gamepad; you'd think that would be a relatively easy fix.