The depths of the moon will be explored across a long-term episodic model. 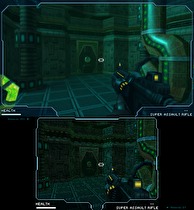 Mutant Mudds developer Renegade Kid has announced Moon Chronicles, a first-person shooter for 3DS that will be released over several seasons, beginning with a remake of DS title Moon from 2009.

The first season of the game, which was outed earlier this month by a trademark listing, will be launched in four discreet episodes on the eShop over the course of 2014. Episode 1, priced at $8.99 in North America, will contain approximately 4 hours of content, while the subsequent three episodes, which will be released as downloadable content for the first chapter, shall cost $1.99 each and continue the story with around 2 additional hours of gameplay per episode. As a remake of Moon, this season will incorporate enhanced graphics and support the Circle Pad Pro peripheral.

According to the studio's co-founder Jools Watsham, the second season of Moon Chronicles is set to come out next year, and will feature entirely new gameplay and storytelling, separate from that of the original Moon.

In an interview with IGN, Watsham revealed that the game's episodic structure was inspired by television dramas.

He said: "We love shows that really cement the feeling where you watch an episode, you have a cliffhanger, and you absolutely need to watch the next one. That’s our plan for season two and beyond, [for us] to approach it in a similar way. ‘What’s the whole point of the season? Where do we start and where do we end up?’”

Moon Chronicles currently has a tentative release date of spring 2014.

This is very tempting but as I still have my copy of Moon, I may not bite on this season. Sounds like it is just a remake.
Been meaning to finish Moon for ages. Good game.

Renegade Kid usually does interesting projects, but the end result is generally less than amazing to me. While Moon on the DS was visually impressive, the gameplay revolved around the same types of objectives over and over again.


Hopefully this game won't be The Conduit of the 3DS.

I'm on record as being the world's biggest Mutant Mudds fan, and I've liked everything else of Renegade Kid's that I've played as well. I never played any of their DS FPSes, so I'm really looking forward to this one.

I'm open to the possibility that this might be great, but the combination of 'FPS', 'episodic' and 'handheld' just doesn't do anything for me.

Like many people I'm sure, I wasn't hip to the existence of Renegade Kid until Mutant Mudds conquered the 3DS eShop; I love that game so much I will definitely give Episode 1 of Moon Chronicles a fair shake.  I'm not planning on ever buying a circle pad pro, so I'm most concerned about how the controls will feel using the face buttons to aim...seems a little wonky.  I'll be willing to try using the touch screen, but after Kid Icarus that doesn't seem like an appealing option either.

I hate using the face buttons. But I'm a lefty so using the original DS for an FPS was clumsy and even painful because I used the right side face buttons to move around.


I always liked the looks and concepts behind Renegade Kid's DS FPS projects. I will give this a try since I passed on Moon originally. If this turns out great then I hope they go back and give The Ward (was that the name of those games?) The same treatment.


I plan on picking up a Circle Pad Pro XL later this year anyways so that is great they are supporting it with this title.

I wonder what this'll mean for the prices of the original DS cartridge...

I have nothing but respect for Jools and Renegade Kid, but I can't get excited about a handheld FPS. That's why I never bought Dementium or Moon.


HOWEVER, the pricing structure for Moon Chronicles is really intriguing and I might actually try it out. Good move in my opinion.