The fabled reward has returned! 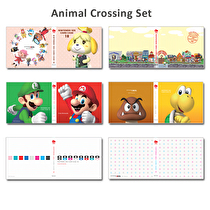 Club Nintendo has released a new Game Card Case in the North American rewards store today, with two themes available. For 400 coins, gamers can choose between The Legend of Zelda or Animal Crossing versions.

The case, shaped like a game box, can carry up to 18 3DS or DS games inside. It comes with three double-sided covers to customize the exterior. The Zelda pack will come with a cover featuring that franchise, another with stylized Mario villains, and also a Club Nintendo themed cover. Animal Crossing’s pack is nearly the same, but with close-ups of Mario characters instead of villains on its Mario-themed cover.

Club Nintendo previously released a Game Card Case in NA back in December 2012, which quickly sold out, for 250 coins each. After being listed as out of stock for several months, Club Nintendo’s customer support announced its return was unlikely at the time since the reward was "produced in limited quantities".

Check out the gallery below for the cover designs!

400 coins is a bit pricey, but I picked one up nonetheless. I missed out last time and this is the kind of thing that I hoard my coins for anyway. Although with my luck, the 3DS XL Charging Cradles are liable to return soon and I won't have the coins for it.

400 coins is rather high compared to the previous release... but 250 coins seemed hugely underpriced when compared to everything else Club Nintendo offers here, and it seems like racking up Club Nintendo coins is easier than it used to be.


Gladly grabbed the Animal Crossing set because I think that cover is awesome, but have to admit the villains cover with Bullet Bill is also great. Shame you can't get both in the same package.


Did anyone else get one?

...the 3DS XL Charging Cradles are liable to return soon and I won't have the coins for it.

I thought of this too... but the last two times they were in stock, they sold out so quickly that I didn't have a chance to get one anyway.  Not holding my breath that a third appearance would be any different.

Glad to see this coming back. I was lucky enough to snag one (ended up buying a second case on eBay as well) when they were first offered as Club Nintendo rewards. Think I might just have to pick up one more now that they're back.

It looks like the Zelda set is already gone, I can only see images of the Animal Crossing one on the site.

It looks like the Zelda set is already gone, I can only see images of the Animal Crossing one on the site.

Try looking for a drop down menu above the 400 coin price on the Animal Crossing reward page, I can still see an option for Zelda on mine. My page used to default to Zelda though, so it's interesting that mine is now defaulting to Animal Crossing...

If these were still 250 coins then I might get another one, but for me, one is probably enough.

I considered getting an extra one for my DS games, but then I remembered that I don't really play DS games anymore. I can live with taking them out of their individual cases if I ever want to play them.