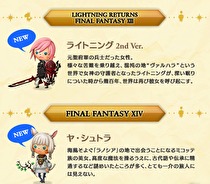 A demo for the upcoming 3DS title was also released on the eShop and Nintendo Zones across Japan containing one track each from Final Fantasy XIV, Final Fantasy X-2, and Lightning Returns: Final Fantasy XIII. Theatrhythm Final Fantasy: Curtain Call contains over 60 playable characters, 200 songs and is set to release in Japan in Spring 2014. To read more about the game, be sure to check out my impressions of the demo from Tokyo Game Show here.