Super Mario Bros.: The Lost Levels Is One of This Month's Club Nintendo Rewards

Get ready to pull your hair out in one of Mario's toughest adventures. 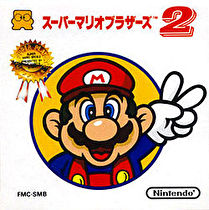 Mario's Picross is the 3DS Virtual Console release of the now classic Game Boy puzzle game. Chip away at grids to form images, many of which are themed around the famous mustachioed plumber. This can be your new gaming addiction for only 100 coins, and is available only on the 3DS eShop.

In one of the best games released on the DSiWare service, Starship Defense is a tower defense game set in space. 150 coins will earn you this one, only on the 3DS eShop.

Super Mario Bros.: The Lost Levels was actually the original Super Mario Bros. 2 in Japan. Deemed too hard for the American audience, we received a Mario version of Doki Doki Panic instead. From the start this is one challenging Mario game, you can face your fears and play it for only 150 coins on the Wii U eShop.

The last Club Nintendo game is the NES classic Balloon Fight. In a game very similar to Joust you, uh...to tell you the truth I don't know what the heck is going on in that game, except that you don't want your balloons popped. It is a fun game though! It can be yours for 200 coins on the Wii U eShop.

These games will be yours for the taking until January 12, when they will be replaced by four different games, so act fast.

200 coins for Balloon Fight. Someone at Nintendo must really love this game... or is it a subtle form of trolling?  Not quite sure.

I'll also "pipe in" about Mario and say I'm not completely sure if saying Lost Levels is harder than Super Mario 2 is accurate.  I've been replaying Super Mario 2 aka Doki Doki on Wii U lately, and that game is freakin' really, really hard.  Maybe unfairly so.  Maybe it's easier with the Princess, but with Mario it is insane.  Very had to make accurate jumps, and enemy placement is Ninja Gaiden level sadistic.

I think the level at with balloon fight is regarded (it always seems to be regarded higher than it deserves) has something to do with the fact that Iwata (the man running the show) designed it.

Nintendo, at least historically, has a reputation for making their sequels count.  They typically try out new ideas and don't come across as releasing level packs and calling them new games.  A Nintendo sequel usually stands apart as a unique and essential experience.

I wonder if Lost Levels inspired that.  It's one of Nintendo's earliest sequels and probably the first sequel to a console game they had ever done.  Faced with making a sequel to one of the industry's greatest hits they released probably one of the most unoriginal unessential sequels ever.  They dropped the ball, so much so that they decided to repurpose another game into the American sequel.  So after that did they think "never again" and made sure that other sequels would be bigger, grander and more creative?

Though prior to that they had shown a lot of creativity with their first series of any sort, Donkey Kong.  DK Jr. is quite a different game from the original DK and DK3 outright switches genres.  But then DK3 was not well received because it was so different.  So maybe Lost Levels was an extreme overreaction to DK3 backlash and then they realized that making glorified expansion packs wasn't the way to go either.  They actually had found the right balance in DK Jr. which is clearly not a DK expansion pack but still stays within the same genre and has similar enough gameplay elements to appeal to fans of the first game.  It's interesting to think of a time when Nintendo was still pretty new at videogames and was still defining their identity as such.

Me neither. Using Peach is practically cheating.

I'm going to pass on this month's Club Nintendo freebies. None of them are especially enticing. I just reached Platinum last night so each additional game with a PIN will be saved as a head start for next year.

Me neither. Using Peach is practically cheating.

I may be wrong, but it seems like there's this inertia thing going on with Mario, where if he lands on a platform at speed, he actually moves a little bit before coming to a full stop.

And if I had the time, equipment, or the inclination, I would do a let's play or livestream of me playing it.  I'm on 7-2 now, and there's this incredibly frustrating part where I've got to get up this group of 3 staggered platforms, each with at least 1 or 2 of those fuzzy round guys buzzing all around it.  Only they're going so fast, and in freakin' synchronization, so that I can't make it to the third platform without taking a hit.

BUYER BEWARE -  The Lost Levels is actually a Wii VC game and NOT a Wii U VC game!!!


The Club Nintendo homepage shows it as a Wii U game, but once you click on it the status changes to Wii only. I'm not sure if Nintendo will fix or address this soon, so I wanted to let you guys know before buying. Hope you weren't expecting Gamepad play  :@

What?? I'm going to burn this mother down.

Balloon fight is the first Wii U game on offer, so I wonder if the higher price indicates that Wii U versions will cost more or if they actually believe that Balloon Fight is a premium game.

I think the level at with balloon fight is regarded (it always seems to be regarded higher than it deserves) has something to do with the fact that Iwata (the man running the show) designed it.

I didn't know that.  Now that you mention it, that might be why Sakurai is given such extraordinary latitude and kirby is so prominant.  Iwata's HAL love runs deep it seems.

Bleh, yet another month where the only games I want I already own.

Missed this but wanted to agree.  Starship Defense is the one game I've gotten so far for free and it is pretty great.  I'm not a fan of tower defense games usually but something about it clicked with me.