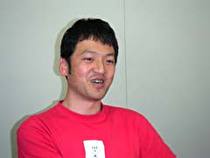 Masamichi Abe previously worked on games such as Tekken and Tekken 2 with Namco before transitioning over to Nintendo. He has worked both at Nintendo EAD in Kyoto, Japan, and Seattle, Washington. Abe has also served as a director on titles like 1080° Snowboarding, Pikmin & Pikmin 2, Metroid Prime: Hunters, Mario vs. Donkey Kong: Minis March Again and Aura Aura Climber.

The whole Mii thing is a pretty important and powerful intellectual property.

RABicle?! Where the hell did he come from?

RABicle?! Where the hell did he come from?

Hence the last created IP that mattered were Napoleon cards.

They should make a new   F-Zero game!

Many years ago I would have been excited about pretty much any new Nintendo IP.  But now I have to cross my fingers and hope it's not a casual game, some minor eShop title or some quirky Japanese game that NOA doesn't localize.  There are too many ways a new Nintendo IP could fall flat.

The last thing the guy worked on was Aura Aura Climber.  I had to look up what the hell that even is so the "new original game" could be something like that.

Yeah we've been over this a million times over. We'll just have to wait and see if its something that will add to the Smash Bros roster next gen. Looking forward to Nintenzoo Trainer going toe to toe with Wii Fit Trainer in the summer of 2021.

Death Blood: Blood Death a third person shooter with a skill tree and micro-transactions, and DLC, and play to win, and quick time event cut scenes, and F2P, and uncanny valley, and pay to win...